The re-build to the Prudential London 100.

In a quick update.

After the fallout from Eds-Lon, VO2 testing last week and the return to commuting, my/our plan had been for this week to be a number of specific rides.  The rough plan was:  rest up last weekend, Monday commuting, Tuesday night tandem training, Wednesday night at a birthday meal, commute home with Anna on Thursday and then easy Friday before heading to London. 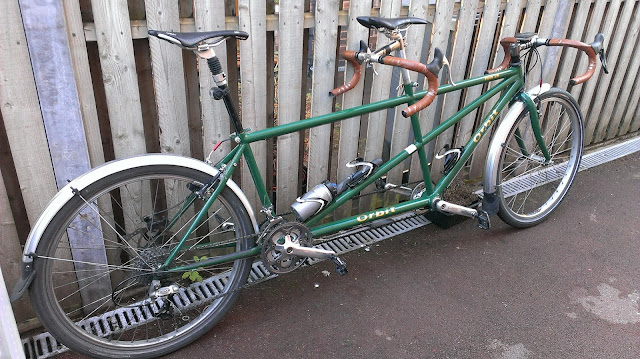 The reality was different.

Monday I did feel good:  my legs rested up over the weekend and I had more punch on the ride to work.

On Tuesday, we were supposed to take the kids to the grandparents, jump on the tandem and go out for around 40 miles.  This broke down when my parents couldn't take the kids, the tandem needed a repair and a part was missing, so Tuesday night was swearing at chainrings and mechs.

Wednesday was a positive.  The kids thoroughly enjoyed the 94 year olds BBQ birthday bash and I got to ride down to Leicester after work.  Knacked kids, but well fed and a fantastic party atmosphere in Chris and Em's garden.

Thursday was our last tandem chance and getting close to the weekend.   Most of the tandem repairs have work, now just a bit of fine tuning.  We did a shorter ride (~40km) taking in climbs, cornering and so on to get the feel back.  It would have been nicer to have more tandem training in the legs, but by now, I'm feeling the week.  With kids in the North West, we took advantage and went for a meal and Star Trek. 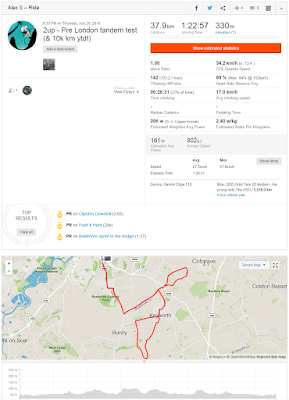 Friday wasn't a taper day.  It should have been, but being late for work it was a Z4 sprint to the shower and office.

Not the calm week I wanted.

But, I'm really looking forwards to this weekend.   A road trip down to Essex with Anna, seeing Sal, Ged and Tandy, the bike show and the ride Sunday morning.  On the tandem it's going to be very different but the tandem crew working s are flooding back quickly - it's going to be fun!
Labels: cycling London100 Orbit sportive tandem training