Dr Stav is Alex Stavrinides.  There are letters and credits and qualifications and so on to the name, but that's best kept to the LinkedIn profile and professional papers.

Alex is a middle aged, middle of the road kind of man with kids and a wife who has a passion for science and cycling.  He's roughly the same age as Sir Bradley Wiggins and even shared a locker room with him at Manchester Velodrome in the late 1990's, but that's one of the few times their paths have crossed.  Since then, Brad has done alright for himself with a headline or two while Alex headed off to Uni, got a degree, did a load of kayaking, climbed some mountains, became a teacher, taught some kids, married Mrs Stav, did a Masters, became a dad, brewed high tech beer for a PhD, became a x2 dad, did a load of research science and now does a science supply job and still passionate about cycling and science.  Brad became a Sir, Alex became a Dr..  We haven't shared a changing room since.

This blog is roughly a personal, informal, informative account of a slice of life.  It's fairly unchecked (damn you dyslexia) so will be prone to grammatical gaffs and errors but effort is taken to keep it minimised.


EDIT:  I've opened up my Strava because people keep wanting to see what I do.   You'll find me here.  As a note, I appear as "a cyclist" and often get asked "why "a cyclist" and not your name?"   So I wrote a blog post here. 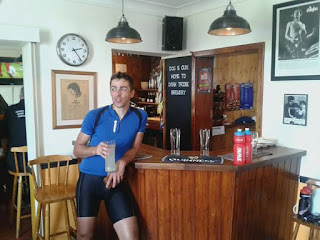