A week where not everything goes to plan.

34 minutes to update the blog from last week.  Go!

As I was planning on going long on Saturday and I wanted a bit of time just spinning, I opted for Zwift and the mp3 player.  There's something about bashing the eardrums while exercising which feels good.  OK, a bit cliche, but my music of choice: Clash, London Calling album.  Even more cliche but I love the track: Train in vain.


Turn it up LOUD!  VERY LOUD

Rest of the week

The rest of the week rattled through faster than I can imagine with Friday being a rest and eat day.  As Mrs Stav and kids were in Essex on Friday night, I was left to my own devices, so my distracted, dyslexic brain decided that I'd get the train home via Derby - an extra 90 minutes of trains.  Meah, I head music, nice weather and felt rather chilled out.

The plan was a 300 mile ride, heading up to the Humber then recon some of the route roads down to Spalding, ride past P'boro and turn towards home just short of Cambridge.  Once home, eat, comfort break and then do the last loop to hit 310 miles / 500km.

In reality, the ride out was blistering.  I reached Brigg without any trouble, ate well at the local bakery, hot day so stopped for water (no tap tinkering this time), got to the northern turn round point and started the Lincolnshire Wolds bit.  I scouted the faster roads down to Hornchurch (now going to be in the route) and headed down the New York straight.  Pace wise, I was on it!  I averaged >30km/h for the first section, slowed a little with the Wolds but then increased my average pace on the Lincolnshire planes, creeping up to over 31 km/h.

I've been using a Time carbon fork with carbon steerer.  Earlier in the ride, I heard an innocuous clink and couldn't work out where it had come from.  On the New York straight, out of the saddle I heard a minor creek but couldn't pin down if it was a loose bolt or something else.  At the road junction Hubbart Bridge, right opposite the station, the carbon fiber steerer ripped and I hit the floor.

Ride over, ride no more, sit on the platform.  I have a minor injury to my shoulder and wrist but nothing to worry about and it's healing within days. 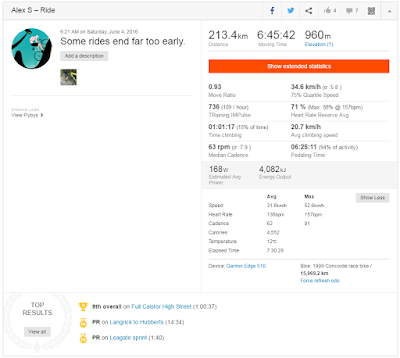 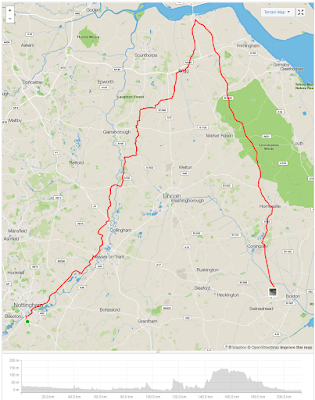 As I had to get the train back, I had the chance of going out again for an evening ride.  I swapped to Genesis and headed out to do more.  By this point, with a heavy bike, legs that had worked hard, cooled, sat on a train and then been asked to ride again, they gave a resounding get lost, so a relaxed, rode and headed for home. 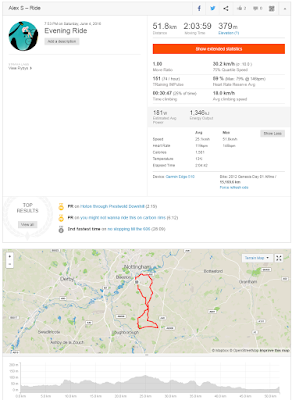 And now for something different.  For ages I've been wanting to get Rebecca bouncing on her mountain bike so while Mrs Stav did time on her road bike, I took the kids for some fun in the park.  It may have been a small ride, I may be on a battered MTB with a tag-a-long and a slow puncture, but this was soooooo much fun.  Seeing how much the kids enjoyed just playing, bouncing over roots and chasing through the woods was brilliant.  The Strava track which cuts out at too slow a pace and under the trees doesn't measure how much fun this was. 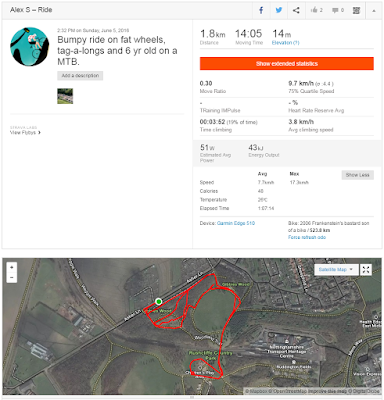 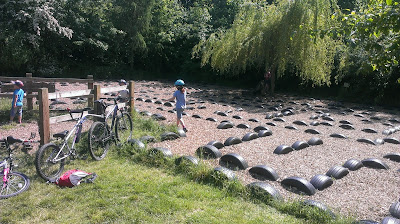