It's now getting to the final weeks before the big event, and this week/weekend has incorporated a number of events. 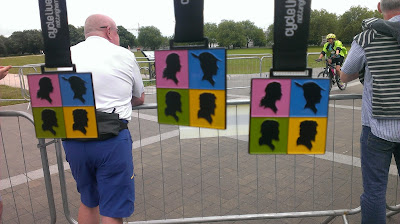 As more money has come in, a massive thankyou to all who've donated.  I've had an update from ThermoFisher, who through the Workplace Challenge have help raise around £350 (yet to be added to the charities page).  Overall, this is taking the total raised towards the £2,000 mark, going over it with Gift Aid so a million thanks to all who've donated.

Didn't quite go to plan, but it probably did me a favour in the long run.  The previous weekend was the 360 miler so for recovery, I took the car to work Monday.  Yep, the wise choice of things to do, but even so I missed my bike.  As much as this challenge is a extreme departure from normal riding, cycling to work is very much part of my routine and not riding feels weird.  My legs recovered reasonably quickly and I took the kids for a little joy ride after work on Monday - hardly challenging, but it was nice just to be in the sun, on wheels with the kids giggles.

One side-effect of the 360 mile ride was a slight tendon damage to my right ankle so I wanted to rest it but at the same time, I wanted to capitialised on the the weekends training.  I had intended on riding Wednesday night (the blue bike was begging for a 60 mile thrash), however hot, hyperactive kids not wanting to sleep while Anna was teaching squashed that - if you have any plans, "the kid" factor should always be thrown in as a wide card to destroy them.  Missing training was annoying, but the reduction on training load did give tendons an extra chance to recover.  In hindsight, this was better.

The route is nearly finalised.  After hours of looking at maps, swapping screens with Strava, VeloViewer, LEL site and Reddit for route options and then getting a highlighter pen out to mark up a physical map, I'm pretty sure the route is set.  For those who wish to see if I go by your house, curiosity or looking to repeat what I'm doing, the Strava route is here.

Off the bike, Saturday was predicted to be a dry morning, wet afternoon.   Do the grass or family walk in the woods??   The woods win.  Being out in the forest, away from traffic, town and domestic influences is brilliant and I think Rebecca is getting daydreams of riding her MTB along forest trails..... 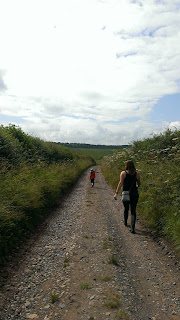 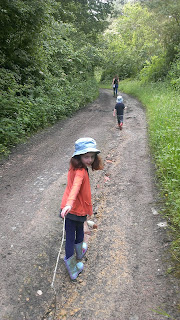 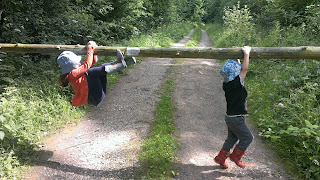 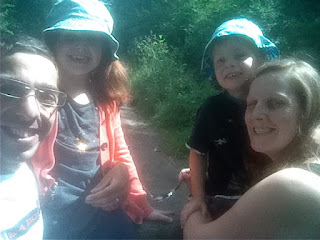 NEW BIKE DAY!!!   New Bike days are always exciting!!  But this one wasn't for me........
As we happened to be going past the local charity shop, there was a little bike outside that would suit Rufus as his first proper solo bike.  It need a little TLC, but for £10, he's over the moon and a proud owner of a new bike. 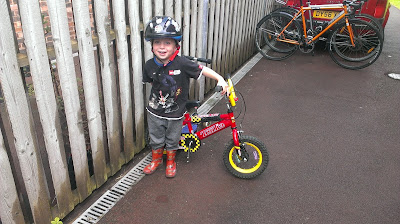 Sunday was the Great Nottingham Bike Ride (GNBR).  As the GNBR is on our doorstep and the route goes passed our back gate and I've done it in some form for the three previous editions, this years ride was Anna's first solo imperial century.  Last year we did this on the tandem, but this year this ride was one of Anna's targets.  For our group, we'd all signed up for the 100 mile route.

So far, the first year I cycled this sportive with Chris and Ed on my Concorde.  Second year I opted for my Blue Steel and cycled with Chris. Last year, Anna and I used the tandem with Chris on a solo so the joke became that every year I should use a different bike - so I opted for the Genesis this year.

The day started early with my parents arriving for child care, while Chris and Em arrived on the Saturday night with some more Eds'London talk and planning.  Clare joined us not long after breakfast and we all rolled out to the start line around 7am ish.  The first section was wet with rain capes on until Harby.  I stuck with Anna throughout the ride, Em and Clare weren't far behind us even with Clare's puncture while Chris had freedom to play up the road for us to catch him up.  Once the rain left mid-morning'ish, we had a nice day in the sunshine with strong breezes.

There was a good choice of food stops this year - the ice cream far stop was fantastic, especially with the free ice cream!!  But I still hate that last section in through Ratcliff - 50p wheels in 1 km.

Anna did really well in her first solo sportive and new solo distance PB so Kudos to Anna.

I enjoyed the spirit of the sportive.  Compared to other sportives, this one I've had mixed thoughts on.  Some times it's a bit over the top with the commercial push, but I enjoyed this years because riding with Anna stopped my pushing for times, let me relax and enjoy just being a cyclist and chat to other riders as we passed each other.  A number of riders thought I was on a fixie when the spotted my hub gear and would strike up a conversation.  Whereas the Fred is all about the climbs and trying to beat 8 hours, London 100 is about hell-for -leather speed, yesterday was far more about doing the distance with the company.  To say I did it in comfort, I did.  I used my heavier Genesis (with saddle bag and 'guards) and the data snapshots below the photos shows my zones (firm Z1 - Z2 ride on HR!). 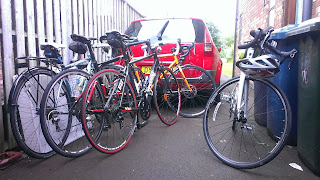 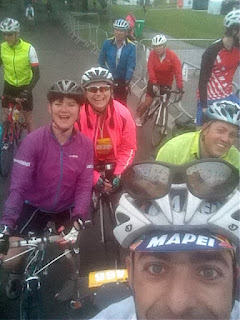 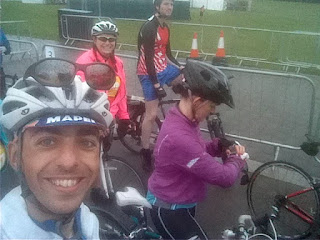 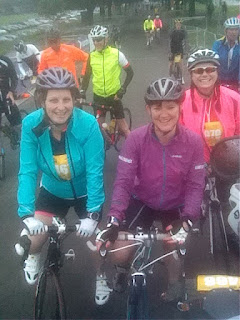 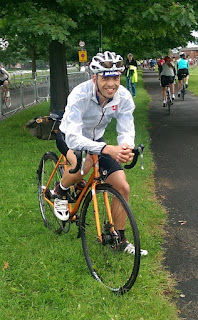 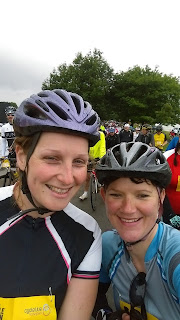 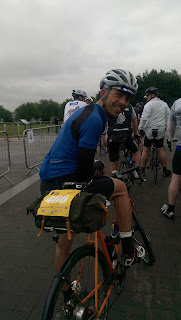 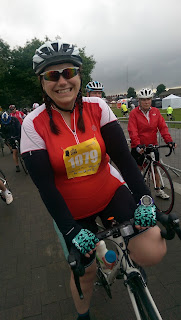 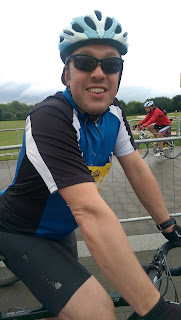 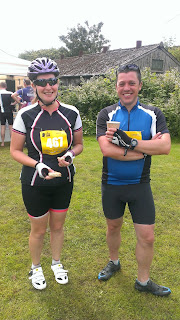 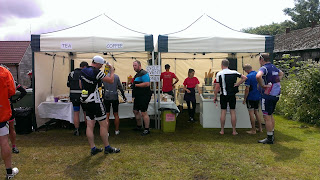 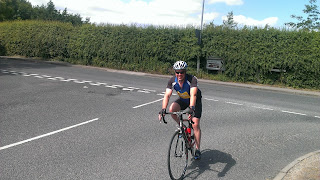 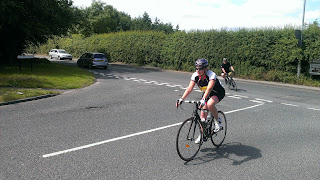 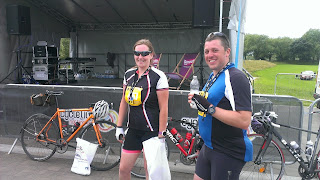 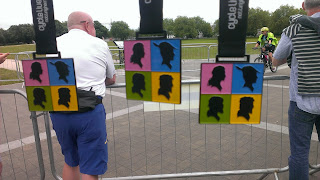 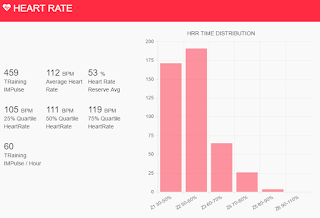 However...........  as I was in low HR zones and lower power out puts through the day, I had intended on doing a second loop after.  The MetOffice had promised heavy rain Sunday night, so I booted up the garage PC, set up the turbo and expected to spin while we got battered by heavy rain...........but only drizzle.  I logged into Zwift, but then ran 2 hours of Sufferfests on the second screen to structure the work out and give me noisy ears.  I regret not getting out on the road but I'm pleased with the 2 hours of HIITs I did - after 7 hours riding during the day, the 2 hours of HIITs felt good, not beyond my function which is encouraging.  Previously I would have been begging for mercy, this time I could do the efforts well.

As a data snapshot, here are the zone breakdowns for HR and vPower. 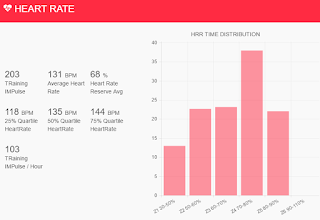 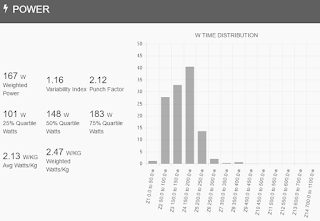 Yeah, things have changed a fair bit.  A fair bit in my own mindset, but yeah my mindset is probably far removed from the normal now.

After the 360 miler, I have a different opinion in my physical and mental ability.  That ride took a lot out of me in every respect, but on Sunday night, I wanted to do another 360 miler.   I won't have the opportunity to before the 9th, but I want to do another big ride first.  The thought of 21-26 hours on a bike is fairly appealing to me right now even though that's not a normal thing to think.

Checking my timer, I have around 10 days until the big off.  Just 10 days and a massive mix of excitement, fear, disorganised thoughts, panic, worry, expectation...........and I can feel those emotions building each day.  Some things I regret or in hindsight I wish I had done differently, other things I'm glad I did or didn't do.

The 7 day weather forecast will be published soon that'll give an indication of weather for the big day - then I think my mental state will change gear again..
Labels: cycling GNBR NSG@QMC sportive training