Now for what I think will be one of the weirdest blog posts I'll do.  It was a big ride, so this is a big update.  It's weird because last weekend was the last "big ride" before the event and physically, mentally, emotionally, process wise, project wise and challenge wise....... the end is near.  Today, I hurt.  On saturday I rode 579 km (360 miles) and my ride time was 21 hours with an elapsed time of 26 hours.  Good, bad???  Working it out, but Garmin had a nice message for me. 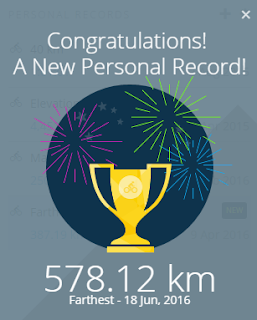 The rest of this blog post may be photo light, as while training I was training and not not sight seeing.  Plus there the whole riding in the dark thing....

My training target was for 350 miles plus a small margin to make sure I'd done what I had intended.

The whole process is taking a toll on me, but this ride was different.  I have been going through cycles of "normal" eating Monday & Tuesday, Wednesday upped food intake and a evening training session and then carb load through Thursday and Friday to burn it all on the longer weekend rides.  My weird night sweats tie in to my diet - "You've eaten a shed load of food, better do something with it, BURN UP!!" and my temperature goes up.

So this weekend, I confess that 350 miles written on paper scared me.  I've never been into that territory of mileage before and at nearly 100 miles over my longest previous ride, that's a good margin to be scared of.  Had my fork not broken 2 weeks early, I should have been stepping up from 300 to 350 miles, but there you go.  But in reality, it wasn't that bad.  At least, not at the start!

Heading North was tough as the trend has been this year - head winds.  I stopped off at Brigg at the bakery (Durhams Family Bakery) for food (apple strudel is fantastic) and then up to where I joined the Eds-Lon route at Barton-upon-Humber.  I had a light tail wind in the rain and started the quicker section heading south with a chain split near Hornchurch (I'll get that KOM on the 9th!!).  After this, I had a short break at the top of the New York straight but tapped out a really good pace all the way down to Spalding for a burger at the American Burger Bar.  It's far from American, but for good cheap burgers, it's a gem.

The Fens section I'm getting more and more familiar with, with a stop around the southern end at Whittlesey before reaching Kings Ripton and heading back up towards Rutland and Nottingham.  The whole route section had been done at a good pace with sections averaging around 31.5 km/h with the undulations through Leicestershire cutting it right back.

As planned, I returned home around 11.30pm and re-kitted for the night section; loops of Nottingham - Newark until I'd done the distance.  This was tough as by now I had a big calorific debt and struggled but I was determined to do the distance!  It was weird passing through Newark 3 times


By the end, there were a lot of fights with the Man with the Hammer.  The last section to home was painful and mind over matter.  The section from around Lowdham (an area I've ridden countless times) I just had no power - everything had been spent and my legs were gone.  It's been a long time since I've been that empty.

So how to evaluate the ride.

I did it!!!  360 miles.  OKay, this ride didn't have to match the challenge distance and I was around 60 miles short of my target in a few weeks time, but that's not bad!  My moving pace is OK, below what I need but this was a solo training ride and pretty much unsupported.  My biggest problem was food - 11,000 calories is a lot of food and to be honest I'm sick of food.  To put it into perspective, 11,000 calories is around 5.5 days of food and after trying to load, trying to eat back, I'm pretty sick of the whole eating thing.

Mentally, it's easier to write up what happened.  I was trashed by the end of it, wanted to sleep around 3 am and struggled in that predawn bit but mentally it wasn't that hard to cope with at all.  I've become accustomed to being the solo rider and a quiet fella on two wheels riding the roads in the dead of night.  And once riding, mentally I was pretty strong up to the calorie crash so within my comfort zone.  Mentally balancing "this is a training ride, not just a leisure cruise" with "control the pace, don't burn out too quick" and "oh look at that!  Pretty" is fairly hard.  It's a training ride because I'm training, but not in the same way a sprinter of 10 mile TT specialist would train.

I was pretty much on top of all my mental faculties even when exhausted and at no point did I want to throw in the towel, randomly shout at street furniture or wish to something to break so I'd have an excuse to go home.  I did have a Strava joke planned for the very end, but my legs were gone, so I'll save that for another day.

While riding, there were a few points where I had the sudden realisation of either "but I won't be training up this way again" or "next time, I'll be on this road for real."  That's mentally more weird than the challenge in some ways as I've become used to the roads up to Hull.  At some point I want to stop here for fish and chips but won't have a reason to be in that area, while I know the next time I head south down through Hornchurch, I'll have only one thing in mind - London.  It's these thoughts that make the whole challenge so different - I've now done the bulk of the training and won't be on the route until the 9th, I've done the Fisher Scientific event, I've blogged around 100 posts on this challenge, the onus is all now on me to ride this and the counter is now down to less than 20 days.  A massive mix or terror and excitement.

Physically, I took some damage but the training has prevented a lot of potential damage.  (I'll include this for training purposes)

From the toes:
Analytically, bit of a mixed bag.  Without doubt I went into a major calorie debt, but I had expected this.  I wasn't expecting it to be the mark shown as there's a difference between Strava and Garmin values so I only have in in ride estimate.  Actual figures is a whole argument in it's own right, but for sure my body went passed the point of glycogen depletion and I burnt a lot of fat.  I can't verify the value, but I'm approximately a kilo lighter post ride but there are a lot of caveats to that claim.

Pace wise, on the whole I was on it and where I wasn't I think I can justify.  Over the route section from Barton-upon-Trent to Kings Ripton, I was at 32.2 kph with the start point reached after 130 km or so.  In reality I'll be hitting this section later in the ride after the Eds-Carlisle and Carlisle-Richmond section which contains the majority of the elevation so if I can maintain a pace pre-Barton, I have a good chance of recovering time in the Barton to Huntington section (providing no head winds).  With this training ride, the majority of elevation was in the 280 - 390 km phase when I'd already done head winds and Fens.

From the Veloviewer data clipped below, my power drop point appears around the 300km point which ties in with the change of course and "the bonk" and loss in ability to maintain pace.  Although I should be annoyed/worried by this, had it been a solo unsupported race (ala TransAmerica, or Transcontinental) it would be more of a concern, where as I know for the 9th I'll have resupplies on hand.

Answer:
Distance - Yes.  In tears of joy or pain, anything short of physically collapse I will be on the Mall on the 10th.
Pace - Yes, no, yes, no.  So many sub questions I can't give a finite answer.  With support and good conditions, I think I'm in with a very strong shot at this.  The problems I had with the 360-miler will largely be resolved with the support car as food and drink will be a lot easier to take on and the bonk will be delayed hopefully until hour 25 when I'm riding out of London.  However, if there is a head wind, then things could be harder.

I have the Nottingham 100 this weekend (plus a second lap) and then tapering before the big day.  Things are looking positive.

Thank you to all the comments of Reddit!!   Especially the anonymous donor for the charity fund!  I read through all the Reddit comments and it was really good fun and thank you all for the disbelief and encouragement in the replies.  If you're a Redditor (or just curious), the link is here.

The charity side has been fantastic and so far over £2000 in the pot.  It's not too late to donate:

Thanks to the support from FisherSci EU.  If you haven't seen:

Part of my mind set is now how close the finish line is.  This has been a hell of a journey so far and I've seen, experienced, been out of my comfort zone, fretted, despaired, laughed, enjoyed and explored throughout the whole process and it's now weird that certain parts are closing off or being done for the last time.  This weekend buoyed me on in some many ways but the fear of the size of the challenge is still there.