I thought today would go very differently, but that's for a different post.

I'm sitting on a platform waiting for a train home.  My training ride hasn't gone to plan.

This morning I was up at 4.30 and getting myself ready for a very long day of training.  Around 5.45 when I was getting my shoes on the BREAKING NEWS flashed up on BBC news: Ali had died.

In my early 20's when I was doing my BSc, I did boxersize and sparring to keep fit.  I hung around with a number of amature boxes, my co-worker at the bar boxed and kickboxed, my house mate watched the fights and I'd watch Ali's classic fights that Rob had on knacked VHS's.  My student digs wall had a poster of Ali and I read biographies on him.  Around that time Faithless had a track honouring him in the charts which I'd play while writing essays.  He inspired me in sport, in his character and in his life.  He still does. 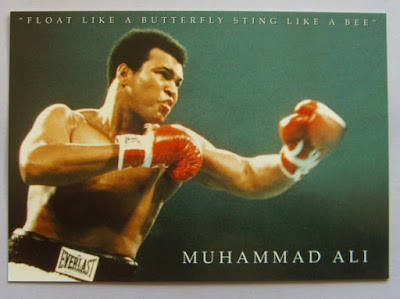 In 1999 when there was all the talk of Greatest Sportsman of all time, to me there was only three names; Indurain, Merckx & Ali.  Last month when driving to work, Ali's wife was saying about the London initiative through Ali's foundation to teach and inspire inner London kids to be more physically and politically active, involved and aware and get them to think about what can and want to achieve.  Ali's name still a heavy weight decades after he moved away from the limelight due to his Parkinson's

I don't believe in an afterlife or that there's anything after death but I like the poetic licence, romanticized iconography and fables of encounters with the Reaper.  Ali had Parkinson's, but I like to envisage that when Death came to take him, Ali trash talked him for half an hour and took him to 9 rounds before greeting him like a friend with a Kentucky hug and a knuckle scub on Death's skull.
One of my hero's has gone, but his inspiration hasn't.
No matter what this challenge throws at me, how hard it feels or painfull it gets, like Ali I won't quit.  Ali was the cocksure, overly confident, quick whited loud mouthed extrovert who could make those claims and have the results to show it.   I'm a quieter, more modest introvert who prefers my numbers to quietly impress than shout it out.  But Ali is a true sporting super-nova.  I'd love to be 1/1000th of the sportsman he was.
Ali wasn't my motivation for picking the NSG charity.  I picked the NSG because Parkinson's and othe neurological disease can potential affect iconic hero's, some close in a family, a middle aged man with a love of cycling or anyone reading this blog.  Today it appears a little prominent.
My humble respect to my inspiration.
#TheGreatest
Alex