This is more two fold.

The first bit of embarrassment is more to do with my body deciding it wanted to reject everything and pass out in an expo.  Sometimes, things can't be helped and this was one of them - a bug which I had incubated for a short time made it's presence know by me wanting to eject all solid and fluids from my body one night.  I didn't enjoy that.  What made it more obvious was that when meeting and greeting with suppliers and starting a day of training, my body decided a shutdown and a restart was in order.  Yep, I hit the deck.  Probably not in an elegant way beacuse all I remember was trying to leave the room  and the the next second finding Gary (one of our staff) putting a pillow under my head and telling me not to get up straight away.  I was the one guy that everyone notices being supported and escorted out.  No-one wants to be that guy.

On a positive note, the illness was very quick from start to finish.  Within 36 hours you'd never have known I was the one who was ill and collapsed on the exhibition floor.

The second bit of embarrassment is kind of mild by Binge-drinking-Britain standards.  Unusual for me, I drank a lot.  For someone who has kids, cycles and all the rest of it, alcoholic units per week are usually counted on one hand.  Last week with account managers, free bars, socialising, meeting suppliers and remote staff, I drank a lot of gin.  Yep, there are photos circulating somewhere that I'm sure will surface at some point.

To draw a line under Malta rumours, I'll say this:

I was always under the opinion that Malta wouldn't be kind on my body and training, but I don't think I did too bad.  The illness knocked me for six, I drank far more than normal but the food was good and healthy on the whole.  The pizza at 4.30am after drinking in the bar on the last night may have been the furthest from my normal diet, but hey, this is a very rare occurrence in the grand scheme of things.  Not being on a saddle for 10 days gave certain patches a chance to recover and the two runs I did I really enjoyed - I may even run more frequently in the future.  To recover any deficits from the week shouldn't be too hard and the complete change of place and pace did me good.  I have new respects, contacts, friends and memories.

As for Strava data, my first run/walk can be found here while my (non-GPS tracked) second run can't be found (I'll see if I can get the selfie evidence from Tom). 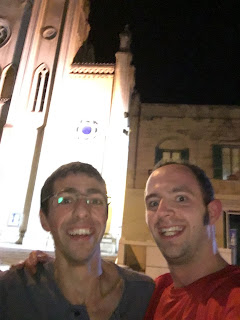 As a final note, many thanks to my boss for sending me, and the Fisher Scientific staff for scraping me off the floor (in every sense) and all the people I met over the last 10 days.  It's been a real blast.