This week to a slight shunt - Monday became Tuesday and all work outs shuffled a little earlier into the week.  Why?  Because if means on Thursday I night get to see my kids before they go to bed!!

The diet is as it has been for the past two weeks.  I'm I getting tiered of it?  Kind of, but not in a "I hate it!" kind of way.  I'm missing/craving an odd food ever so often, but other than that, I don't mind at all.  The biggest adjustment has been the feeling of satisfaction. I'm on the same calorific loading as always, but where in week 1 it felt like a novelty, week 2 felt slightly hungry and wanting more, I've started week three feeling satisfied.  I've mentioned this to Abdullah as an observation.  It may be stomach adaption causing changes in hormone triggers which now means an emptier stomach or smaller stomach no longer triggers the hunger pathways which cam from a larger, empty stomach at the start of the trial.    In the grand scheme of things, I'm glad it's changed as it'll help in the post study diet.

At the start of the week, the half way point in this study, my honest opinion on the diet is positive and cautionary.  I'm positive as the diet has taught me a lot - and I admit in diet terms for cycling and a cyclist lifestyle, I made mistakes.  Mistakes from my own nievity, mixed messages from cycling blogs and the food industry as a whole.  After the trial, there will be a lot of the details, methods and food prep I'll take on forwards from this four week period.  The cautionary element is due to knowing that I am one of two diets in this trial.  What happens if the other diet is better??  What if the other diet is better, but doesn't suit me??  Should I stick to this diet or swap to the other diet??    One thing I am certain of is that after this period, I won't go back to my old diet and I'll eat more cake and biscuits (as part of a bigger diet plan!).  I intend on writing something at the end of the trial specifically for people like me as I'm learning that the rules that apply to my targets are not the rules of weight loss or gym bunnies looking for better selfies.

As a result of the diet and exercise, I can report that my Monday morning weigh in tipped the scales at 67.6 kg.  Still 2 kg down from the start point but no further weight loss so I'm content with that.  I have no idea if fat:muscle ratio has changed, that's for a later date.

This week, a day early in the week and a day less of 9-5, I was up for it and chasing a Wattage.  I went hard in the first rep, 2nd rep wasn't as bad as other weeks but rep 6 hit me hard.  Mentally, I felt good going into the reps but took a blow around 6 when I got annoyed at myself for dropping too low.  Still, my overall performance was up on the previous repetitions so not too bad!  Result! 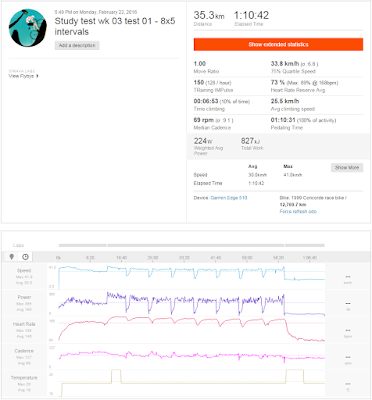 Ah, the 100 minute spin.  I had been looking forwards to this.  After the previous night, the 100 mins was fantastic for resetting the legs.  No music this time, just more reading of my book.  I blanked the clock for the first 50 minutes and by the time I'd ticked of another 20 pages, time was flying.

Second intervals of the week and now well past the study half way point.  And that felt awesome!  I had some trepidation about this HIIT as Mondays went well, so thought I'd burnt out to early in the week.  I was feeling a little meah during the afternoon, but after warming up my legs started to feel good and started to kick hard and quick.  Rep 2 I still hate, but power is feeling a lot more on tap and higher.  I can dig deeper, my heart is responding well and I'm feeling more of the fight.  Rep 6 was well up on previous HIIT's, 7 hurt but I fought back in the second half, and rep 8 I smashed it for the last minute.  Legs hurt, heart maxed and lung burned.  EPIC!  Overall, a rough analysis showed a 249.5 W average for Mondays HIIT and 260.5 W average for Wednesday giving a week average of 255 W (roughly 3.8 W/kg).  I want to recover and go again. 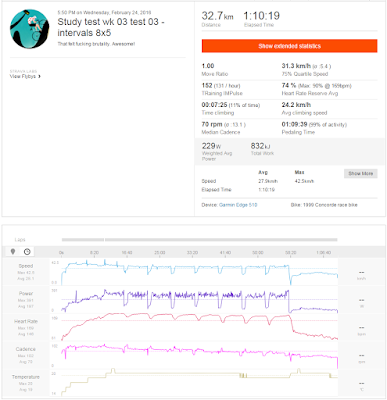 Wow that was scold. 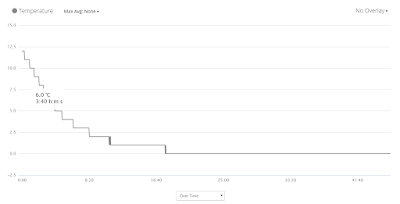 Bar the Garmin cooling from being inside, you get the point.  45 minutes at 0 Celsius out on the road on a Friday night after work, 50% power and muscles not generating much heat.  Data for the interested. 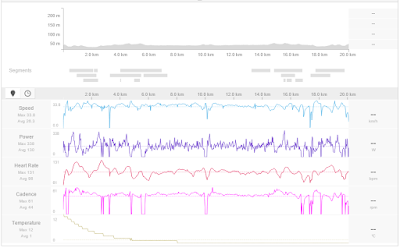 After the night before freezing ride, this was still going to be cold and with the lower power, difficult to keep warm.  With extra layers under and over my Gabba, it was time to fill the hours.  I wandered a little and explored a few country lanes I'd previously shot passed the end of which was good.  A load of local knowledge improved as I could pin together villages that I'd previously thought were further apart or couldn't be ridden between.

Trying to dial down the power is tough, really tough.  Partly because I want to go faster and further and partly because of how much I rely on my muscle heat to keep me comfortable.  I can see the logic behind these riders, but looking forward to being unleashed! 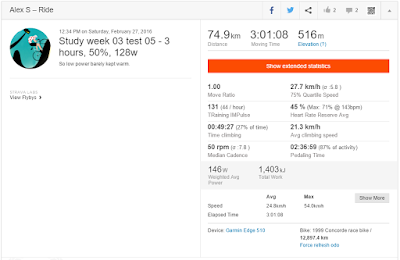 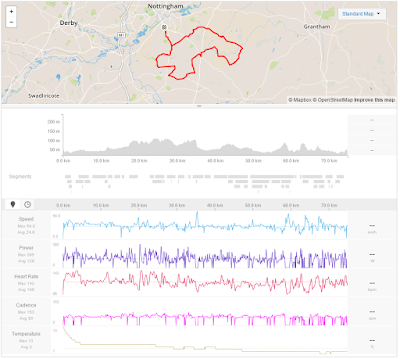 Intervals as showing their strength as my power up put is up and I'm looking forwards to what I can push it up to in the final weeks.  Although I can tell and see that the diet and training is working and I'm itching to fuel and go for a massive long ride, I know I have to stay on track for at least the next two weeks - one more week of intervals, recoveries and controlled diet followed a week later with the final tests and biopsy.

The amount I'm learning about the process and overall training methods is invaluable and I'm looking forwards to turining the last few weeks of training into results.