How week two has played out:

The diet is doing well.  I've lost some mass over the coarse of the study so far, but nothing I'm majorly worried about.  Although I don't have a number to go off, I'd suspect that my fat reserves are now lower than at the start of the program as I'm around 67.3 - 67.7kg at the moment (down from 69.3kg at the initial weigh in).  My work mates are used to seeing the blue bag of food and understand that when the food is being passed around the office, I can't bite.  They all know about the diet, training and study so understand the process.  It doesn't stop Kasia trying to wind me up with talk of donuts, cheese cakes, cream cakes, creamy coffees and trying to quiz me on my favourite cake flavours (coffee and walnut cake by the way), but I know that this is all part of the program and has an end date to this phase.  I also know that after this phase, it'll be on me to maintain this more performance orientated diet through to at least mid-July and in some form for years to come.  The diet is working for me and I'll carry on a lot of the mind set post study and post Eds-Lon.

I'm getting more routine at "dosing" the snacks through the day and knowing what I have, is what I have.  There's no point scoffing the lot in the morning session when I know I'll flag a little in the afternoon.  With a family member recently being ill, remembering to stash a biscuit for after evening visiting hours and the 40 car journey home is taking forethought.  The routine of the work day is fine, but the weekends take more discipline - especially when kids are around, the kitchen door is open and there's an abundance of foods around - I miss a casual apple or banana from the kitchen!

I did make a mess up of one breakfast.  Half asleep I grabbed a (unlabeled) bag of oats, grab the cream and started heating up my porridge.  I thought Abdullah had given me a more commercial porridge with raisins before putting it in my bowl and heading for the table.  It was musili.

I've noticed that I'm not really an impulse food buyer based on curb appeal.  Filling up at the petrol station and seeing the amount of crappy food being advertised and fighting for attention, those instant gratification foods really don't appeal.  I normally shun junk food adverts anyway.

This week is a carbon copy of last week and will be copied again next week and the week after, so excuse the repetition.

A new training week and an introduction to Hamish, a student from the University (Human anatomy BSc I think) and a racer.  As Hamish is a week behind me, we won't do the four weeks of lab together but overlap for three as we both have the after work hours slots free.  Being Loughborough based, Hamish will ride from L'boro for the three hour weekend rides and I'll ride from Notts before catching up in the lab each week.  The motivation of a second rider helps too.  I still hate interval 2 this week as much as I did last week and I'm sure this'll continue.  I had wanted to go hard but lacked a little - not sure if physically or mentally - but felt stronger around interval 5. 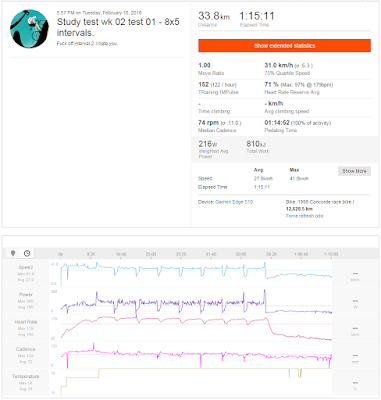 This is almost like therapy and rather relaxed.  At 50% effort, I can maintain this indefinatly (at least until hunger wins out at least).  This week I was back to old-skool Chemical Brothers, a bit of Leftfield and read Kassad's story in Simmons' Hyperion.  A good chat with Abdullah at the end and feeling refreshed from a work day and intervals.  Surprisingly, this ride also dampened down my hunger once riding as I settled to a 90 rpm spin.  As on the static bike, no cadence, distance etc, but here's the Strava image. 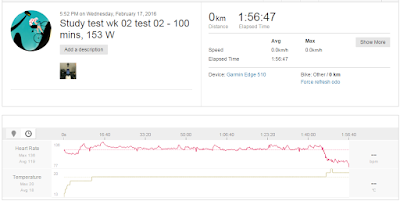 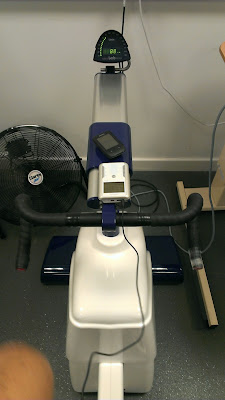 Second intervals of the week.  On Thursday morning I was feeling really up for it, but by Thursday afternoon I was feeling the lag but the session went well.  Standard comment:  I hate interval 2.  I certainly sweated more than Hamish, felt the burn around rep 3, refocused in next rep or two and squeaked past the 8th.  I can keep consistency between reps, but power wise I find it easier to focus on heart rate.  In the early reps, try an get a high heart rate (165 - 170 bpm).  I know I'll reduce on each rep, but aim at keeping HR high and stable.  If I push passed the stable point to early, I pay for it!  This can be seen in the data below. 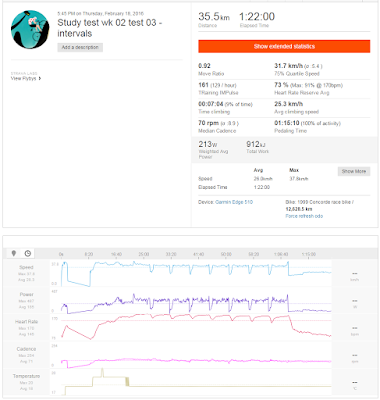 EDIT:  Just for reference, while I was sweating out the second HIIT session of the week, my workmates were having a meal without me.  Here's a photo from the event.  Had I made it, I would only have been able to have a soda water.  Or diet coke. 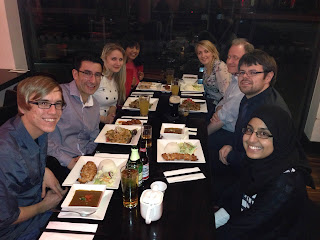 45 minutes at 50%.  After a long work week, family commitments and not getting home from work until later than normal, a 45 min recovery ride wasn't bad.  Nice, tepid end to the week. 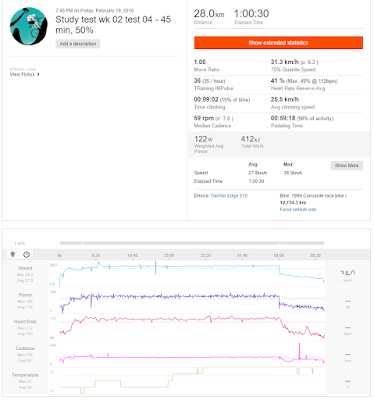 This ride was tough and rough.  I'm not used to this kind of riding and not a fan in the slightest.  To fit in the 3 hours this weekend, I had to change plans - no roads possible.  With family, I was in London Saturday day and busy Sunday, therefore the 3 hours had to be fitted in Saturday evening - at home, after driving home, on the turbo trainer.  To stick to a set pace/power on a turbo takes some effort - legs can't do what they want to do, you have to keep an eye on the power, there aren't the mini breaks and coasting sessions you get on the road, and there's no variety in gradients.  Instead, a bit of Arnie with Running Man and a Terrorvison before Tequila killed their careers.  My God I'm longing to get back on to long road runs. 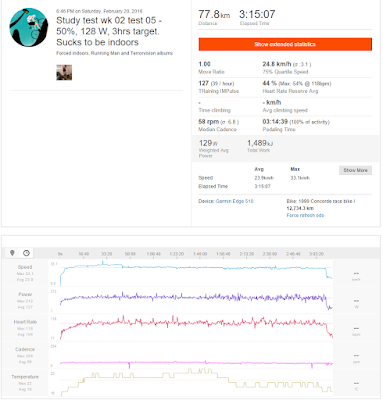 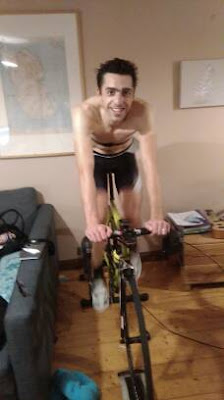 For the data geeks

In a future post I'll detail this more but the study is looking at power output with diet modification.  The larger project scope will be published sometime in the future, but I have data from my own sampling.  This data is being charted, but I'll go into the details sometime after the study completes so I can report all the data - week to week, over the whole carb study period.

For this, I've been looking at analysis in Golden Cheetah.  As a brief peek, data looks something like this: 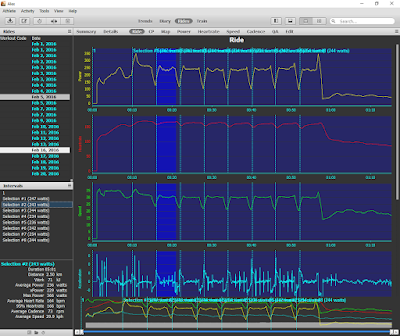