On the bad list:
This week kicked off the four week training block for the carbohydrate study with Abdullah at Loughbrough University.  Monday was the food pick up day, followed by interval training on Tuesday (8 repetitions of 5 min maximal effort x 1 min recovery), 100 min glycogen depletion stationary ride at 50% Watt max determined by the pre-testing (153 W) on Wednesday, second set of intervals Thursday (8 reps, 5x1) and a three hour ride at 60% Watts max (153 W average) and a 45 minutes recovery ride at 50% Watt max (128 W average) ride over the weekend.  This I'll repeat for four weeks total.

Along with this I am eating a diet provided by Abduhllah which consists of a diet in similar calorific value to my expected intake but with a different carbohydrate content and delivery - my usual bulga wheat box has gone and now every three to four days I collect food for the coming days and to the amusement of my co-work, I have a surprise every dinner when I peel back the tin foil.

So far, I'm rather enjoying it.  The mentality is different in terms of I can only eat what's in that days "bag."  Each time I get a food supply (usually 3-4 days at a time) I split the foods and label them (colds and normal storage by each day) and each night I check what's coming up tomorrow, sort food so I know what to expect (breakfast, snacks, lunch, dinner etc) and off I go.  I know what I have and what I can't have (yeah, pancakes were on the banned list this year) but for now I quiet enjoy the process.  I think this says more about my minds organisation than anything else.  In terms of energy, I find it different but not lacking.  I find food satisfaction different in terms of smaller more frequent satisfactions and hunger points than the more sustained satisfaction I find from my usually fairly bulky but low GI diet - after a discussion at the end of one training session, I'll be changing my approach in the future now knowing a little more about what I should be doing.  There are certain foods I wouldn't naturally pick being provided such as whole milk for my drinks and cereal and cream for mixing in where-ever I like.  After years of skimmed milk on my cereals and cream usually being fairly rich and a minor part of my diet, plus a whole industry which demonises fat, along with most of the population I think the fat relationship things is a little fuzzy - especially for those of use who are lower in body fat category.  But I will recommend the Naked protein chocolate bars!

A couple of things I'm noticing fairly early on is how my body is getting used to this process.  "Bowl openings" (i.e. - going to the crapper) is a different rhythm but not in any major bad way; I think I had more hunger pangs when I started this diet, but this has subsided as I've got used to the snacks and paceings; and the food choices are different to what I'd usually go for but not in a bad way (more interesting snacks and less higher flavoured family evening meals).  I don't know how this has affected stomach capacity but I'd expect that there would be some feedback here.  The only thing I find I miss is the ability to pick fresh fruit when I like.

I kind of miss my usual diet, but I'm finding it fascinating exploring this side of my eating and obeying the study rules isn't a hardship.  If anything, it's helping me become more aware and disciplined ("if not in the bag, it's not going in my mouth").

I'm rather enjoying it and I can see why it gets it's reputation and methodology from.  Abdullah has been very good at talking me through the principles behind the motivations as to why the training is structured in the way that it is.  For the test period, I have the use of a PowerTap wheel and the Universities static bikes with most data being shared - certain results I can't see as it may change my mindset when I repeat the tests at a later date.

The weekly structure is a process of HIIT session on my bike on the turbo on the first night, 100 min 50% static ride at a fixed Wattage to second night, repetition of the HIIT intervals on third night then a 45 minute 50% Watt max recover ride and 3 hour 60% Watt max ride on the road before the next weeks repetition.

The intervals are hard but good in a masochistic way.  The burn kicks in fairly quick; rep 2 I'm finding the most stressful as for me it's too early!  Normally it takes me longer before my body knows what it's doing and settles a little and i can get focus.  Once I'm into it, it's bearable but the end of rep 8 is more than welcome.  From the short period I've been on it, I've noticed my HR being elevated above my normal, my 5 min sustained Watt output for each rep is fairly consistent.  These HIIT sessions are to improve and build performance through stress, recover, repeat. 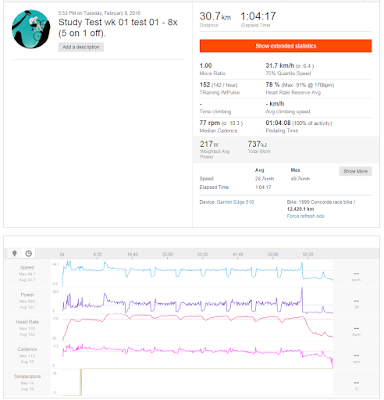 The 100 min steady power session has a different aim:  to deplete my glycogen stores so that when I return to eating I am rebuilding with known foods and to help condition my legs.  The static bike is set at a pre-determined Wattage and all I can do is spin - faster, slower, standing, sitting, lying down, the pedals will only turn if I'm doing 153 W.  For some people, this is death - boring, monotonous pedalling in a room with a wall in front of you with no traffic interruptions, scenery, down hill micro-recoveries or much else stimulation.   For me, a bit of music and holding a steady rate for a long time is what I prefer.  I'm more endurance than short sprints so sitting and holding a set point feels more natural.

The one thing I did notice was the tandem training from last year.  Similar to tandem training, on a static bike it's harder to rock around and sway the bike or those out of the saddle efforts which gives certain contact points a break - all this makes your arse go numb quicker.

Session three is a repeat of the first intervals.  Each person responds differently and has different perceptions of the pain and power.  For me, rep two was hard again because it's "the wrong point" in the way my body warms up, just like the first session. This session I was fired up for it after a busy day at work, the diet is working and I felt good from the sustained ride the night before.  Overall, my interval to interval difference between the Tuesday and the Thursday was around 15W increase.  I felt fatigued around rep 6 to 7 and 8 was a battle, but my god it felt good to be pushing hard!

Max heart rate wise and sustained heart rates, I was higher than the Tuesday and the 179 bpm peak (although brief) is higher than anything I've scored for some time. 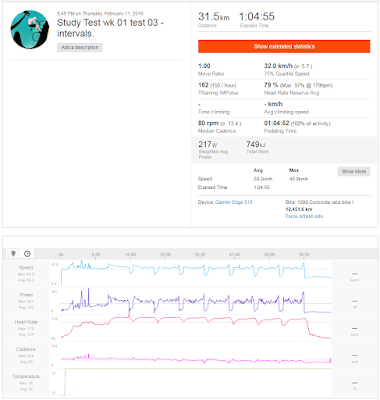 This is the recovery ride, so a low power, 45 minute 50% Watt max, (128 Watt) steady spin to recondition the legs and keep them ticking over.  I'd love to make this my commute and be out on the road as the weather is cold and still with some showers, but I'd find it hard not to be tempted to overpower it (or be late).  Plus I'd have to do another ride home that would be against the rules.  Instead I took the opportunity to sit (on the bike) at home and chat with Mrs Stav.  Sweat on the living room floor. 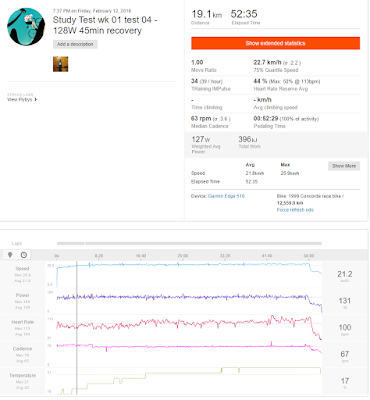 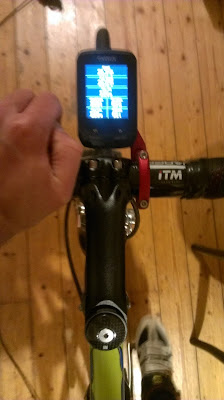 Rock and roll on a friday night!

Final session of the rotation is the 3 hour road ride although sessions 4 and 5 can be swapped around.  Ok, I balls up on this one (explain shortly) but I took the opportunity to ride and chat with ex-work mate Matt.  3 hours is much shorted than what I prefer to go out for and trying to sit at a set Wattage is.........hard.  With the Garmin I had my average and current wattage displayed but trying to keep it down is tough, my legs almost always naturally wanting to push up to the 210 - 230 Watt range and every minor climb hitting +300 Watts without really thinking about it.  Winding down the power took some concentration.

Usually I ride a lot of solo stuff over long distances, so to have the opportunity to ride at a lower threshold where you can hold a conversation, enjoy the ride, see the sites, catch up on life at Notts Uni and what Matts' upto with his cyclocross, Fred Whitton training and life in general was a very welcome change.

This ride was pretty much exploratory in some ways as I've previously worked on pace and heart rate thresholds rather than power.  I had a rough idea of distance but couldn't be sure I'd keep to time and power without having the experience and knowing what effect weather, traffic and terrain would have.  In the end, 88 km.  There was some differences between Garmin devices:

And now where I dropped a bollock.  My target power for the 3 hours was 153 W, NOT the 163 I thought it was - I was aiming at riding to 10 Watts above what I should have been.  Next time: Sharpie and numbers on the stem.  I feel like an arse for that mistake.  Now for the Strava data. 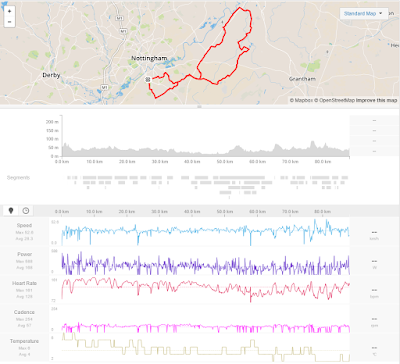 Photos of hunts, Matt, me and my double data setup: