As Wenslydale is a little bit like a communications blackspot, this post may appear little historic.  WiFi has reached the moorlands, but as Google likes 2 factor authentication (SMS), one factor ain't here yet so I'm tapping this out in the holiday cottage with a coal fire by my side.

I've been feeling ill.  Not ill ill, just not in full health.  The viral vectors (kids) finally got me with some weird fever thing that they’d had which hits at night and gives some malaise during the day.  No mega bad, just drawn out and after 8 nights to date of feverish sleep……..  So my usual Wednesday night session I canned just to be cautious.  Didn't stop 315km on Good Friday and as I had planned a route up to the Yorkshire Moors, I was till fit to ride.

My planned long ride for the weekend of the 2rd April was home to the holiday cottage in Wenslydale.  Direct route should have been around 230km but as I’d have the chance to do some of the LEL route, I detoured to take it over 300km.  To do this I could head straight down the Trent valley, pick up the route at Barton-upon-Humber and jump off the route around Catterick.  This would also be the first proper test of the new dynamo wheel that I had built.  Luckily, the new dynamo light arrived just in time on Friday evening for a quick fitting Friday night for action on the Saturday.

Saturday morning and the weather was crap.  Light tail winds were welcome but the first section all the way to near the Humber was in rain or drizzle.  Several hours of slowly getting wet is demoralising but part of training.  The predicted clear skies did appear until much later than expected and by the time I was over the Humber bridge and heading for east of York.  I had a couple of minor mechanical errors (I opted for a tri style rear bottle mount behind the saddle to mount the tool kit and pump which lost a bolt and pitch the kit into road) but ran well.  The dynamo hub and B&M light in the dark are fantastic.  The hub/light combo I can really recommend and I'll add details when I get the chance.  I can feel the wheel is slower than my standard wheel Fulcrum Quattro that I usually use, but not debilitating – it has it’s points of use, just not every daylight hour.

The biggest problem is the tyre and why The Man With The Hammer got me.  I ran the new wheel with a 23mm tyre at a higher pressure which has a lot harsher ride.  Usually I roll on 25mm but as I wanted to get rolling, I swapped over the tyre from a training wheel.  The result appears to be a lot more road shock going through the base of my wrists and my usual tyre of choice (25mm Conti GP4000s) have more give and are more supple .  I thought my dexterity had gone due to cold holds but it appears that I have carpal tunnel in both hands and lost most strength – yeah yeah, too weak and limp wristed to open a bag of pea nuts.  I scrabbled around in back pockets to get food, but struggled to open packets.  I now know what it must feel like to be an old man or someone with very limited hand manipulation.  Something to note......

Final thoughts on the ride regards the route – particularly the section east of York through the Howardain Hills and crossing the Humber Bridge.

This was my first time crossing the Humber Bridge (ever?).  Google maps and the rest showed one way of getting up onto the bridge deck which wasn't the actual way to get onto the bridge so it took some familiarisation to work it out.  I know now and glad I did it in daylight because it’s confusing and too complicated – who ever worked out the bike route is a nob because its crap and not suitable to skinnies.

For LEL, yeah, it might be a nice idea to use those quieter roads and use the Howardain Hills section.  It is a very nice bit of the world (Area of Outstanding Natural Beauty) and the views and wildlife was beautiful.  At one point I was riding along the edge of a forest with a large white owl accompanying me, something I'll always remember as one of the added bonuses of these training rides.  But I'm not sure if it was the weather, farm traffic, undulations or all of them, but I'm going to look at re-routing.  I feel I wasted a lot of time and energy on roads covered in farm slush and mud, dodging potholes and doing unnecessary undulations when the flat to the west would have been much faster.  I know I'm basing the route on the LEL southbound leg, but I'm not doing LEL.  I can afford to modify the route if I think it wiser!

[NOTE!  I'm away on an old crappy HP Notebook.  I'll come back and edit this post with Strava data etc when I can get to something with more than 2Gb of ram] 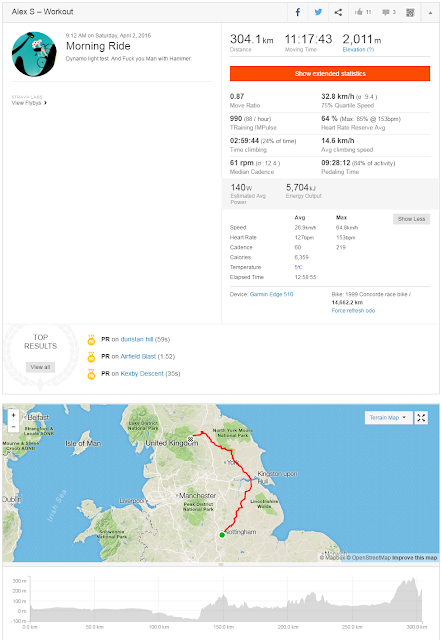