First day without any diet plan from Abdullah and I can eat anything I like!  Cream cakes, pizza, Chinese meal for 6, 5L of full fat Coke....   Bulgar wheat!  My god I've missed bulgar wheat, salad, beetroot, mixed nuts and balsamic vinegar.  And fish cakes too.  But all in moderation and I've already adjusted my meal plans.  I've even taken to having cream on my muesli and sticking to the diet plan of the last month (with some flavour modifications more than anything).  It's nice to have the freedom of food choice, but I really enjoying sticking to the diet of the last for weeks.

Also, today was the day I didn't have to look at a power meter read out.  I can commute on my heavy steel bike, ignore the numbers and enjoy the feeling of pushing legs hard on the open road.  With a good, crisp morning and cool evening, it good to be a cyclist.

Still having my own food.  Downside is that for organisation, I have to take the car.  The brief cycling fix of yesterday was a bit too much like foreplay - time for the VO2 max test and more food parcels so forced into the metal box on wheels.

For the VO2 max test, this was the same format as the first test back on Jan 15th - 95W, 35W ramp at 3 minutes, RPE scale, gas bag in last minute until the world goes black.

Not the most impressive image above, but the important details:  I only tapped out in the 305 W phase!  270 W phase completed so my number is going to be up on the start figure of 256 W  - Abdullah doing the numbers for power max and VO2max.  Happy days!

Finished the day picking up food for the next two days - these are the standardised meal plans to level all test subjects before the biopsy and test on Friday.

Ha ha!  What an epic start to the day!  EVERYWHERE was flooded and heavy rain all the way to work.  Something just felt fantastic and comfortable.  I loved it!   The roads were strewn with debris and awash with water, but it wasn't too cold, little wind and it just felt like a hard man day.  Put on your Flandrian best, apply Rule #9 and Rule #5 it!  I like Aled's ride from that morning.

The standardised diet - I'd forgotten about the jelly beans from the first time round so it was great to have these again.  Looks like I might have to go to the sweet shop at some point......  Feeling good, loving being back on the road, and rough data in Strava/VeloViewer is massaging my ego.

The diet days have become part of my life, so Thursday was marked out a two things - crumpets and a lot of chocolate spread, and the last supper.  Work was very busy, but I did get the amusement of being on a diet while spreading the excess Nutella onto a Maryland biscuit all in the name of science.

With localised flooding, I took a couple of detours to get home and tried to keep the power down ready for Friday test.  I also prepared the last supper - the last Loughborough University Sports Nutrition Research Group supplied meal. 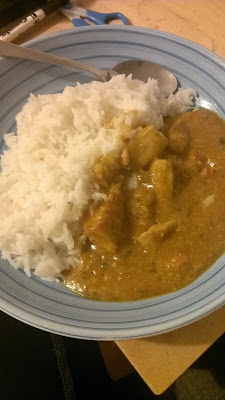 Start the day.
Ok, Mrs Stav is ill, so not the best nights sleep to precede the testing.   Up early, no breakfast, just water and drive down to Loughborough to join the test team.  It's an early, start. 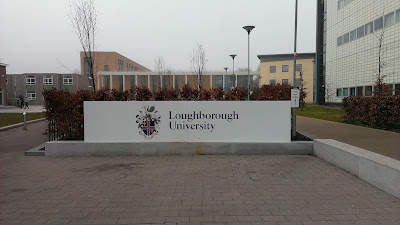 Skin folds
First task was the naked weigh in (65.8 kg, lightest I've been in my adult life), then into the skinnies and time to be drawn on by Lynsey.  The numbers are to be published, but safe to say I've lost body fat.  All skin fold values have reduced with the only increase in number being thigh girth.  These numbers will be digested over the coming days so I can't give much detail at this point. Post drawing, it was over to the other lab for the start of the carb testing.

First blood
First preparations are the cannula in the right arm and right thigh biopsy pre-exercise.  This morning I was cold (plus I think my circulation has dropped) so drawing blood was a little harder due to vasoconstriction.  Carl conducted the biopsy with Abdullah aiding.  As per the first test, this was well done - the skin anesthetised first, followed by the facia.  I couldn't feel anything pain wise but could pressure wise.  Yeah, for some reason I giggled when they were taking muscle from my thigh.

60% depletion
Next step was the 1 hour ride at 153W - 60% of my original watt max as determined on the 15th January.  This felt easier than the first time and if anything was a good chatter time.  At 20 minute intervals, blood was drawn and I breathed into the gas bag for metabolite analysis to see what my body was metabolising through this period.  All in all, fairly easy - apart form the fact I hadn't had breakfast.

Second blood
To get the difference in muscle glycogen it was straight over to the bed for the second biopsy.  Is is through reopening the first biopsy site and taking a second chunk.  This one feels a little more brutal as the anesthetic is clearing but nothing more than a dead leg.

306kJ TT
Simple, turn the pedals until the energy output reads 306 kJ.  No markers, pacenotes, HR, power indicators, just push.  First 50 kJ clicked off with a blink of an eye.  The next 50 kJ was as my heart settled and the equivilent of Rep 2 from the other nights.  I kept my mind on the 53 kJ as this would be half way and passed it pretty quickly (in my mind's eye).  By 200 kJ, starting to feel it and the last 50 kJ felt like they'd never end.  Got there and stopped the clock around 21 minutes - over a minute quicker than last time so roughly 10% better - analysis to follow once the numbers are crunched.

And that's it!
Study over, cannula removed, shower, leg patch and my official involvement in the study is over.  I have some Tupperware to return and I have the PowerTap wheel for one more extra ride, but I'm now kind of free (except for the 179 days to go).  My Friday freedom extended to "bugger the diet, I need breakfast!" and a walk into town.  I have a slight limp, a box of Tupperware and stack of visitor permits, but I'm fitter, skinnier, faster and more powerful! 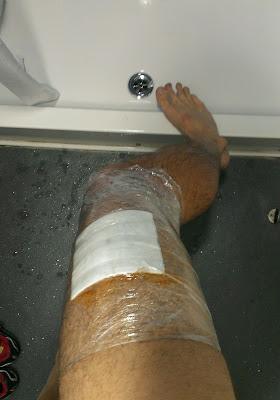 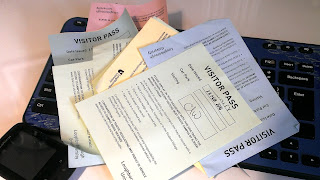 The remainder of Friday.
One job I did have to do was to drop in at the LBS.  On special order had been the hub I'll use in training and through the night of the 9th.  I've selected a Shutter Precision SV-8.  It's a shiny little gem.  Many thanks for Loughborough PedalPower bike shop for helping me get it.  It's blinging! 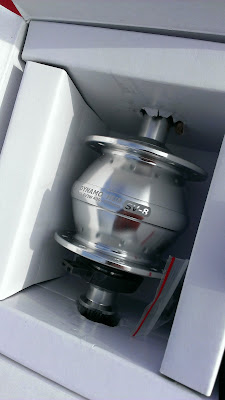 This was the first time I've had a ThermoFisher canteen dinner in ages.  Hobble around the office (wasn't too bad this time) and carb load - training starts again on Saturday.

This counts as my first real day of freedom - of sorts.  I did a quick link earlier

Abdullah and Carl very generously loaned me the Cycle Ops PowerTap wheel for the weekend, so for interest and future planning I wanted to see where my current form lies in comparison to 2015.  This meant taking a ride from last year and repeating it - I selected a ride I did on the 6th of July last year which was 185 km, mixed rolling terrain which was mainly South East of Nottingham.   These were road I'd visited a lot over the last couple of years so familiar.  All I had to do was repeat this route exactly.

The ride was very mixed.   TIP!:  Don't go out for 185 km if 24 hours earlier you'd been starved, biopsied, ridden at 65% for an hour to deplete all glycogen, biopsied again, 306 kJ blind TT and not had the opportunity to recover.  Having said that, although I did worse than last time I wasn't too far off and with sufficient prep I would have been well up or ahead.

In terms of riding, I've changed.   Last year I did this mid year coming off the back of the Fred Whitton challenge, on the build of a second performance peak and had a lot more endurance rides in my legs.  This time I noticeably lacked climbing form but had a better ability to ride tempo at a higher pace in a higher gear on the flat at a higher average speed.


So where does the comparison leave me?

I took the kids swimming and I cut the lawn listening to Paul Weller.  Today was all about recovery.  Week done.

Final thoughts on the week.

This week has finished a first major phase of the project.  To do the study and the work of Loughborough justice, I can't leave it here, so I hope to get a project summary written next week.  The first meeting with Abdullah was last November, my first lab meet for a VO2max test was 15th of January and now it's the 13th of March.  I've been fed, I've learned, I've sweated, showered, spun, recovered, shivered, snotted and been poked, prodded, stabbed and tested over the last 2 months.  I've also laughed, met, chatted and ridden with some great people over that time and I'd love to share more of what I've experience and found out.