The final week.  Too soon and not long enough!

My greatest apprehension is that this week is the last of the four training weeks.  The current training plan runs out on Sunday night and then it's test week so my pre-prepared food parcels run out Monday morning.  For the week after the training weeks, I have two days of controlled pre-packed diet prior to the biopsy on the 11th of March.  After four weeks of set meals, pre-weighed and measured diet bags, the onus will be on my to mimic and maintain the plan for the coming months.  I'll do a greater write up after the biopsy, but the nutritional content, volume, variety and interest has held for the entire study period - I've enjoyed it, learnt a lot and want to continue with it.  I'll feel like I've let myself down if I finish the project and then opt for cheap, crappy junk food after everything that's been invested into this over the past weeks.

As in the previous weeks, the diet has had it's quirks - I was tempted to porridge my muesli after the mistake I made the other week, because, hell, I liked it!  I've had various people put tempting foods to me, but resisted every time.  A fair bit of talk has gone to "so what are you going to eat after this??  Big blow out with a massive burger??" as this phase is nearing the end.  In all honesty, I want to walk into the office after the biopsy with a 12 inch pizza topped with 1/4 pounder burgers, a wheelbarrow of fries and BBQ sauce for the show, but it doesn't appeal food wise and after four weeks of progress, it would feel like stabbing myself just for a cheap show.  I'm looking forwards to sun dried tomatoes, tuna steaks, a beef steak and a good salad with mozzarella cheese balls and balsamic vinegar as part of my healthy, carb/protein/fat ratio diet according to my body mass and activity level more than anything else.

Although this is out of the scope of this phase, I had the fantastic news from SiS over the weekend.  I sent a cheeky email detailing this project and if they want to be involved.  OK, I'm not a budding Froome so there's no dedicated team, branding of everything and bundles of freebies, but they have given me the offer of nutritional support and well discounted products.  Technically, until after the carb study all their products are currently banned, but I want to give a massive thank you to SiS for their support - these are products I would buy anyway by choice, but the discount will make a difference in the grand scheme of the next 6 months.

As this is/was the final week of this phase for HIIT training, it's a bit like the last week of revision before a test.  Mentally and physically I'm wanting to push myself to get every last drop of benefit from working with Abdullah but knowing that I have my limits.  No matter how much I will my body to push out >300 W average for hours and hours and smash every interval, I know that my muscles can't so I have the mixed anguish of wanting to push higher and higher and knowing that my current physical limit will be behind my ideal.  I want to go out and smash a long ride, but it's best all round to stick to the plan.  I have this week, the test week following and then I'm free so it's time to improve and consolidate what I've gained over the past month.

I want to say there is clear daylight between this weeks and last weeks numbers.  Last weeks jump in power infused me with the good will to push even harder and target a higher power output in this HIIT.  In truth, I am/was a bit pissed off with myself.   On the bike I focused on 30s power average to try and maintain an output above last weeks average and in some areas I was happy that I was up.   But maintaining it was difficult and mentally seeing the number drop annoyed and frustrated me.  I felt like I suffered but looking at the power per rep, overall I was up on Monday last week - a couple wavered, but on the whole I did better - just mentally I felt worse.  None of the fired up fight of last Wednesday carried over.  Some time you don't sleep right the night before.  Sometimes you're just meah.  This was the session I was meah but wanted to be better. 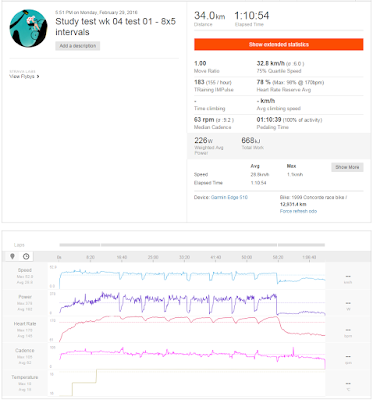 After what felt like a bad night the night before and a hectic work day, this was the day I was irritable.  Good job I was going to be on a bike for 100 minutes!  Actually, it did me a world of good.  As these sessions are on a static bike that'll stick to a set power value regardless of cadence, all I can do is spin and switch the brain off - of sorts.  It was good to chat for the first 30 - 40 mins with Abdullah about nutrition, biochem pathways and various other sports science related topics and have some mental stimulation while doing my depletion session.  I've read more of my book (will the cybrid story lead to the formation of the Shrike??  Is the Shrike a manifestation of the All Thing???  How does this relate to the Academics story and Rachel?  Keats, the Poet?).  For most people, sitting at a low power and spinning is monotonous.  For me, I think it was the reset I needed, distracted me gave me a break from my work day, re-condition the legs from my personal crisis the night before and let me relax.

After this session, I'm feeling more refreshed, and more positive - my data ain't bad, physically I'm a hell of a lot better off then a few weeks ago, my diet is better and Abdullah's offered support for follow up and a wheel for testing on a >160km ride.

Messed up a bit with an autopause when the Garmin lost a satellite and I was chatting and didn't notice hence the weird trace but the data: 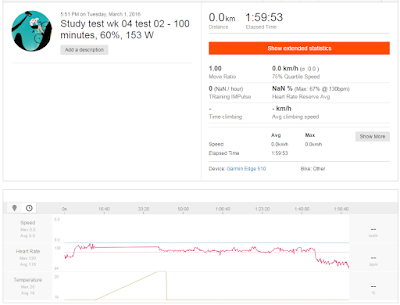 Second HIIT of the week, HIIT 8 of 8 and the final HIIT of the carb study.  The final night to push a good number.  And I was up for it, and I'll miss these sessions!  I was ready for the pain (see previous posts) and I brought it on.  By then end, I felt amazing, spent, elated and knacked.  Everything I should feel.

I took a different strategy this time to lower my power in the first interval to ramp it later in the session.  In most ways it worked as although my session average was above the first session to the week, the first rep was lower.  Compared to my self annoyance on Monday night, I was up for it and pushed hard, particularly in the last couple of reps - I spent more time out of the saddle in a climbing pose as I could push a higher power and risked going longer each time.  Dead legs and being empty can wait for the next morning, but any energy I have in the last session was to be left in the last session.  I gave it my all, and pleased with what I did - a bigger gain would have been nice, but I'm happy that I leave this phase without regretting going too soft.

As for the past 3 weeks I've had Hamish on the turbo next to me.  It's going to be weird not meeting up in the lab, the jokes on the rollers and the weekly routine because I've enjoyed it.  Won't mind doing week 5, 6, 7........ 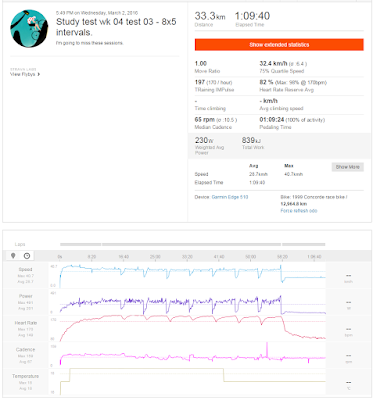 Friday night 45 min, 50%  power spin on the turbo. I did have the intention of taking this out on the road, but as it was the end of week, I'd had the chance to catch up with Mrs Stav and chat while doing this.   Holding 128 W is very easy on the turbo compared to the road (even if it is a bit monotonous) so a bit of a crappy film, watching the UCI Track World Champs and chat, make weekend plans and find out what the kids had been up to at school.  OK, a couple of seconds dicking about, but apart from that, all according to plan. 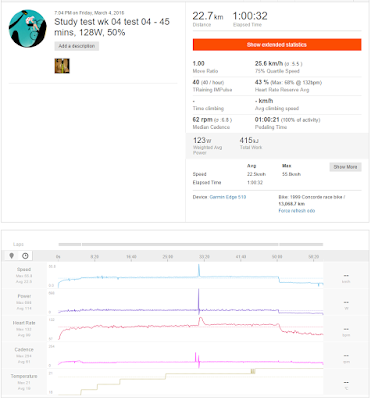 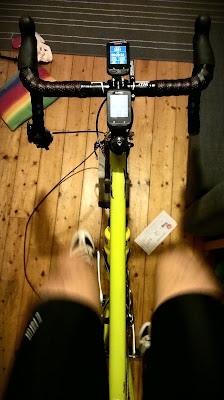 Final part of the training program.  I took the chance to be on the road, because I love being out on the road.  This was penned in to be a ride that would take me from the south and work my way home over the three hours while the rest of my family went out for a meal.  Yep, I was over time and over power, but I have my excuses;  this day was cold, I was hit by 4 hail showers plus once up on the Wolds, hit by head winds all the way home.  Trying to keep the power down is really hard, and riding to a Watt average take concentration.  On the early climbs, I could see my 30s power output drifting higher before even thinking about it - I was feeling good and naturally wanted to flex some muscle.  As I settled, I enjoyed the run around even with frequent cloud bursts and hail - some fantastic strong rainbows with the storm clouds and winter/early spring sun.

Hitting the higher points I picked up a lot more wind than expected and trying to keep pace to hit three hours with a head wind pushed up my power output - my 128 W target gave a 139 W average.  Yep, by the end I was over power no matter how lightly I turned a crank and even trying to keep below 100W to lower my average I was going to be more than three hours with no way of short cutting back.

Frozen ride done and all training done, I rather enjoyed it.  I've noticed a fair degree of adaptation to the warmer lab after the four weeks (I felt cold!) so want to know how this will effect returning to a commute on Monday morning. 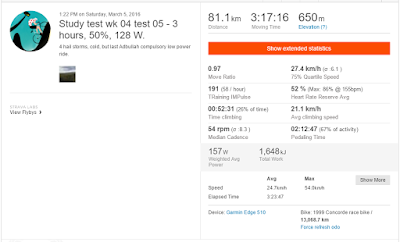 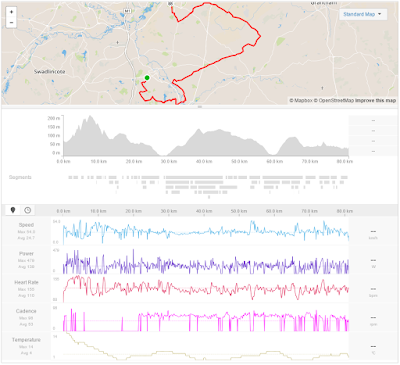 Weird that this phase is ending.  This training cycle is now complete, to the next week will be the testing week to see if the last four weeks has been worth it.  My high point of Week 3 Intervals 2 really was a high point and Week 4 Intervals 2 nearly matched it.  As I put in the intervals analysis here and looking at the numbers, I'm pleased with how week four went even with the low point of Week 4 Intervals 1.

Food wise, I've thought less about how good or bad the current diet is but more about how to keep it going - I won't have Abdullah giving we parcels for my blue box every few days so I need to work out how a new system will work.  There are some minor foods that I miss (olives, sun dried tomatoes etc) and food I've had from the last four weeks I carry on with or buy more of.  As of midnight tonight I'll be out of the controlled eating and to my own devices for two days - should I stay up unit 00.01am Monday and treat myself to a single malt??

Right now, I don't see it as time relax just yet.  My thoughts are for Friday around 11am when I'll be leaving the Clyde Williams building after the depletion ride, blind TT, blood test and biopsies.  Then all the data and hard work will be completed.  But as this is just a phase (and the following day I have a 100 miler penciled in for comparison to previous efforts),  the bigger project rolls on.