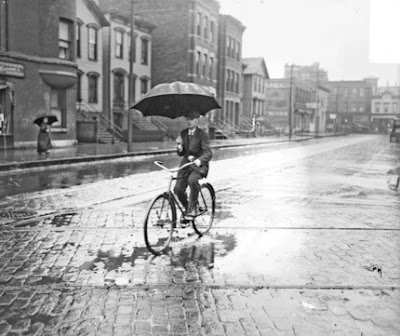 In the Velominati, Rule #9 is "if you ride in bad weather, you're bad ass."

This weekend was a return to training after bike bans, bad mid-week rides and bad weather.   Storm Doris passed through Thursday and Friday was a car day as my boss was leaving.   With Wednesday's disappointment and bad weather, my weekend plans were downgraded to a bad weather ride at a more human distance - and a chance to ride with my brother.   Saturday's weather was crap - drizzle, rain but hardest of all was the blustery winds around 50 kph.

Riding with my brother

As my brother lives around 50 km from me, as a leveler I can ride down, join him for a ride and then ride home after.   I get the bigger distances, he gets a decent ride and if I use the Genesis, I get a work out too at a similar pace.   Works out pretty well with a 70 km joint ride.

The way down was hard though - 50 km of headwinds, a detour due a bridge replacement, storm Doris debris and I don't know Leicester roads! It was slower than I had anticipated.

The mid 70 km with Chris was brilliant.   Quiet country roads, punchy climbs, nice villages, just about able to chat around the noise of the wind and catching up about this that and the other going on in our lives.  The devastation from Doris was noticeable and cool seeing a large bird of prey picking on the roadside corpse of a rabbit.

I got my first visit to Cafe Vontaux (see below) before riding back to Chris's house.  After coffee, we cycled back to Leicester, and after ravioli on toast (proper scoff), tail winded it home. 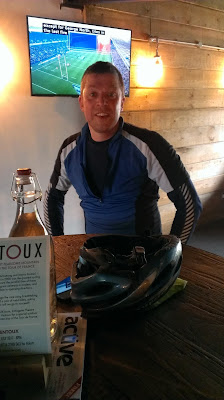 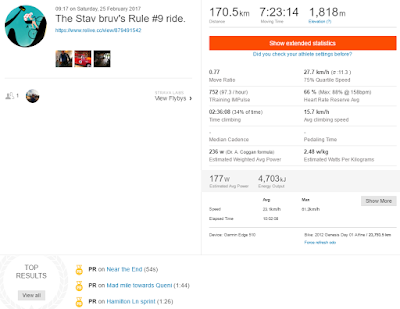 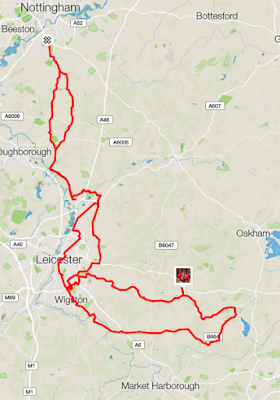 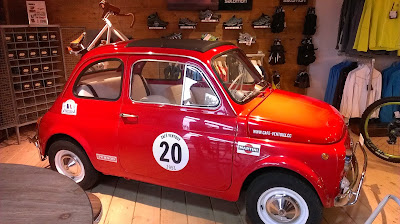 Bit of a weird place for me.   For context, I grew up in a world of "you burn, you earn."  That meant weekends in the Peaks, Lakes, North Wales, Yorkshire and Scotland where you walked/cycled/kayaked in any weather.   You earned it so you visited café's where a mug of tea you could sink a fist in, a burger and chips had brown sauce, salt and vinegar, coffee came from a filter with the options of black or white and the countertop had snacks and sweets to either eat in or pre-wrapped for your rucksack, pockets, boat barrel or dry sack.  All of it was high calorie, cheap but good food.   Nothing fancy.  If you turned up in bad weather you got a hardmans nod of well-done and collapsed on a battered chair or bench.  They were the places where what you did with the kti you had meant immensely more than the brand or how much you paid for your kit.  For kayaking, it used to be upstairs in JJ's.  For walking, any number of walker's bars and pubs like Pete's Eats.  For cycling, it was Eureka cafe.  This is entirely my bias and the standard I work from.

Cafe Ventoux was nice, decent, but nothing like the places that I've loved and identified with from years gone by or my mindset.   Everything is slicker, shiny, ski lodge-esque and London Brick Lane styled with multiple coffee options in glass coffee............. glasses.   No massive mugs for a winter warmer with 5 sugars.  If you lifted the entire set up to a city, it would be a cycling themed cafe, not a cyclists cafe. 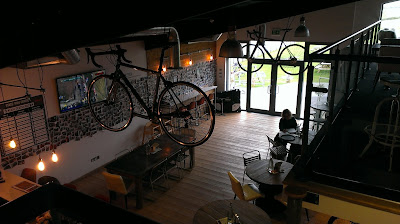 This is my bias and I'm probably not the clientele with the money to spend in there - best cyclists mug of tea used to be from a roadside burger van on the A6 between Chapel and Buxton and cost 80p for a pint.   Ventoux is going for the MAMIL pound who want a cappa-frappa-chi-latte with soya milk, the kind of people who would be skiing if it was in season and have the cafe as there stop point on a 30 mile loop from Leicester in good weather.   It's the place to be seen.

As such, I'm glad I've visited and I wish it well but to me I doesn't have the soul that Eureka has.   Visit Eureka any weekend (snow, rain or shine) and clubs will be congregating and stocking up before a ride into North Wales.   Visit on the way home and the place will be buzzing with chatter of epic rides while riders scoff plates of scram.  Those serving serve with a grudge that they couldn't be riding with you that weekend.   There's also the tails of parties.........Boardman and Wiggo.  Eureka wanted to make you ride to earn your ride being talked about by others around the tables rather than your social media picture being used for cafe promotion.  Yesterday Ventoux lacked the audax crowd taking a breather on a harsh brevet, a touring group with big summer plans pouring over maps at then end of a training ride or a couple of racers doing a compulsory hits and finding refuge before driving home.   Even with Omloop being raced in Belgium that afternoon, there wasn't a gaggle of armchair cyclist cheering on the riders.  It may just been the day and weather I visited on, but i was underwhelmed. 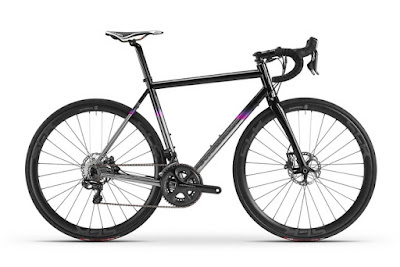 One thing about Ventoux and the clientele is the associated bike shop.  It is a bike shop but also a show room for the more high end Boardman bike range - the ones that you won't find in Halfords.    And there, I found a bike I am interested in............

There are a couple of bikes I find very desirable.   Cycling has changed a lot since I was a teenager and desirability has shifted a lot - steel transitioned to titanium, scandium and aluminium alloys, progressed to alloy frames with carbon forks to full CAAD designed carbon fibre frames.   To me, the full on racing CF frame will always be the hypercar and only justified for racing.   If you own a LeMan GTR you better have a track pass.   I want one, but there are other bikes that I know I'd justify more.   One of them is the Boardman SLR titanium 9.4.

The SLR 9.4 is a Grand Tourer of a sports superbike.  It has the low weight, racing feel of a full race spec bike but has all the technical specs which are race banned or added for the rigours of TCR style riding.   It'll take mudguards, it'll be repairable, it will take a knock and ride comfortably.   Stripped it wouldn't look out of place in a race, small saddle bag and pump and it'll be a fantastic sportive bike for a Fred Whitton or add an Apidura, bar extensions and a dynamo hub and it LEL or TCR.   That's the kind of bike I can justify! And in 20 years time, I believe it will be a bike that'll hold its looks and you could say "In did____________ on that" rather than looking dated.   I just can't find the cash with other life commitments.
Labels: audax cycling LEL Rule 9 training