Last week I had the pleasure of attending the NeuroScience Research Group at the Queen's Medical Centre (Nottingham)'s AGM.   Graham, their treasurer, contacted me and invited me to attend after my 2016 Edinburgh to London ride which I did with their charity in mind. 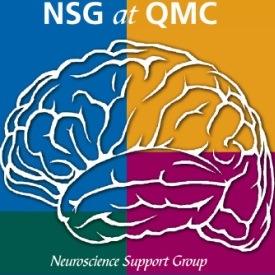 The NSG are a fantastic charity

When I first toyed with the ride idea back in October 2015, I had the idea of doing the distance and adding a charity element to it.  I hadn't previously raised money for charity and had no strong charitable affiliations, so the task of finding a charity was a little daunting.  Asking around my office staff, a few ideas came forward, but I wanted to ride for a charity that didn't necessarily benefit me but supported my life views.    The NSG filled all the ethical and altruistic qualities that rang true with me from the hundreds that were listed on the Virgin Money site.  Throughout the year, I had contact with the NSG via Graham and at the AGM, it was the first time I had met him and the team in person.

Charity size wise, the NSG are a much smaller charity to the big headline charities.

So why should I support them?

Meeting the team, you realise how much impact their research has, what they do and how quickly money to them goes to the front line.   Around the table there were around a dozen of us in a local hospital seminar room with academic and charitable backgrounds.   Around the table we had;

As each person around the table has lengthy credentials, to their names, their details and specialist fields of research are found here.

My neuroscience is the level of an informed literate with a research background, but hearing the detailed discussions of how and where the research should and will go was astonishing.  Over the course of the evening, various research avenues were highlighted, explored, justified and examined to feel out the next step and direction.   Recently published papers from the group were put forwards and the links to last years funding.  Two PhD candidates updated us with their progress and where they think the research will lead them.   These are PhD candidates and research groups that use the money raised to match fund and leverage further funding, stimulate research ideas and leads to real results.

What was fascinating to see was the interplay between and direct linking of the charity funding pot to results in papers, PhD candidates having the opportunities to explore new avenues of research and open up new thought process and ways to tackle neurological problems.

As all AGM's always have a red tape, paper and bureaucracy parts, it was refreshing to see how little this existed compared to the drive to work on solving problems.

Throughout the night, the excitement and impact of the work being done was seen first hand.  Thank you to Graham and the team for inviting me.


Those of you who supported me, you did something amazing.

I did the leg work.  Fisher Scientific supported me, but Vickers Oils Charitable Trust and all the people who donated were the people who put their hands in the pockets and gave a little to a lot to support the research.   It was your money that was channeled through the Virgin Money website and to the lab benches where the research is being done.   Being at the AGM was like being your eyes on the ground to see if the money that you donated had gone to where I hoped to do what I/we think is worthwhile.   Sitting at that table last week I can honestly say I'm immensely proud of how we contributed.


There is still much more that could be done.

The NSG is a small charity and there is always more that can be done.   I never thought I would be "one of those charity riders" and last year in a number of ways I was.   However after riding for and meeting the NSG, I think as long as I am in the Nottingham area and beyond, the NSG will be my charity of choice.

If you wish to donate still, PLEASE DO!!   If you click on the NSG link, there is a donate option to donate directly.
Labels: 2016 charity EdLon NSG NSG@QMC