Last night was the worst I've felt on a bike for a long time.

For context, I had been bike banned and had been way from any distance riding for around 2 weeks.   I'd been doing the usual 50 - 55km per day for commutes, took a week off and then return to commuting.  Wednesday night worship is usually 110 km straight after work.   through last autumn and the start of the year, the normal out of work, round Newark, hills home and a pizza wasn't phasing me.   Well within my comfort zone!

I admit, I was massively up for this ride.   In case you missed my last post, I have a very sexy Apidura dry bag to play with and dangling bike bollocks (gimmicky red light) and only the way in, I was really feeling good.   I was feeling optimistic, looking forwards to the ride, knew the wind would be in my favor and wanted to do test the new bad in the rain expected in the last two hours.  Full work day to do, eat well, finish work and head out to 6 Hills. 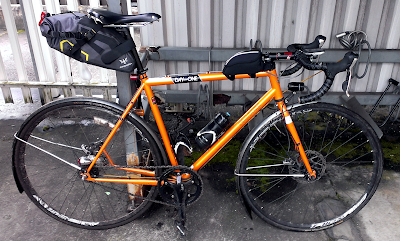 First section felt pretty good.   The Apidura is perfect, legs felt good, weather was decent but blustery and I pushed on towards Newark.   Then at around 35 miles, things started to feel........off.

I struggled.  I briefly stopped for a kit change in Flintham and when restarting, my legs felt labored to restart, something I haven't felt for a long time on such a short ride.  Doing the corner up in Newark and heading back to Notts, my body just didn't want to work in the usual way - leg power was gone, I cramped (!), couldn't settle and just lost everything.   I could/should be able to knock out 110 km without too much effort, but this really kicked me.   Around Southwell, the weather started to deteriorate as expected, but I was well kitted out.

Getting as far back as Lowdam, I was about ready to concede and jump on the train.  Mentally, quitting and going for a train is about as low as I can get but logically the better thing to do with the physical state I was in - apart from there wasn't a train due for another 40 minutes.  So I carried on the last 20km or so back to home.

Everyone has bad days but last night went beyond crap.   I've felt that bad before, but at much much much higher distances.   Mentally and physically, it's a blow.   I don't and didn't like feeling like that.

Today's Thursday and Storm Doris is kicking the Midlands.  I've elected to not tough it out, and taken the bus.   I have a ride planned for this weekend, but in light of last night, I'm going to change plans - less ambitious just in case. 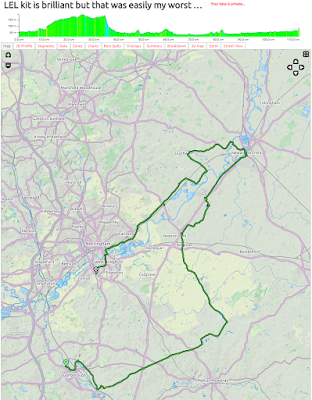 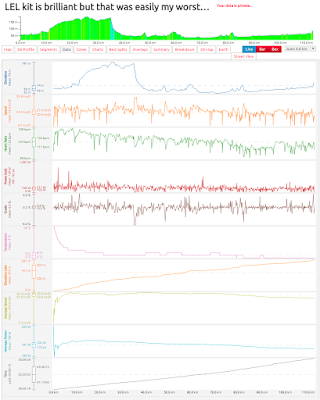 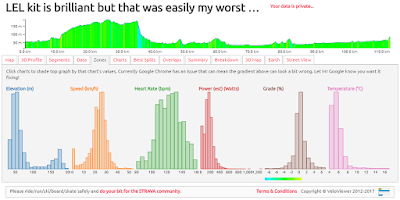