Yep, I'll add more words to the hundreds/thousands/millions of words already blogged about Zwift. My stance is from a pretty skint, middle aged, full time employed dad who wants to improve.

To start with, what I don't have: 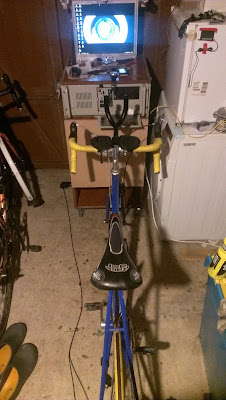 Yep, it's shit, but it's the sweat that counts.

As Mrs Stav makes noises whenever I get any spare parts of eBay, the budget for the set up has been low.  Most of the set up is cast off's from upgrades on other bikes such as a spare Ultegra rear mech etc.  Although a smart trainer would be a fantastic investment, the capital cost for me is too much for something I will use, but I'd prefer to be on the road.  If I can't find the cash for a new lightweight bike, I certainly can't afford half a lightweight bike just for a few hours a week in the garage, so I've had to be more creative.

If you're in the same boat as me, then maybe my blog will be useful.
If you have a full decked out pain cave, smart trainer, full blown gaming rig and AC to replicate every European climb of the Tour de France, less so.

The options in this area are diverse and if you ask for an opinion on any forum, you'll get a lot of different replies.  For programs I've tried and enjoyed, Zwift, Virtual Road and Golden Cheetah have been my preferences depending on what I want to do.  None of them have been prefect, but a couple have approached what I want.  I'm yet to try Training Peaks, my barrier being commitment - if I sign up for anything I want to know I can opt out what I want.

Up until recently, turbo training was a one way relationship.  You pushed on the cleats, the video plays, and your cycle computer clicks away.  The video may shout at you, goad or put up antaganisitc images, but ultimately it won't do anything if you drop the resistance to zero, spin an easy gear and start your warm down 30 minutes early.

Then there was the start of the new wave of virtual reality workouts - you ride, the PC uses your speed to work out your power but more interestingly changes the view according to your speed.  All good, but it's still you watching, spinning and repeating.

Zwift took the next step - ditch the views of the Alps, make it a computer game environment and allow others to appear in your game.  Up until autumn 2015, this was the cutting edge - race virtual segments, chase a wheel, find an online club, track you power, go for KOM's in virtual routes.......turbo training had become truly interactive.

The biggest split in what I've used has come in the last year.  Up to last year, most systems were the same theme - watch a video, turn the cranks, log the heart rate.   Zwift broke the mould with multi-player interactive training and to a certain extent, riding around Watopia was a good novelty.  But for workouts, chasing a wheel is not the same as having structured HIIT's.

And the Zwift lifted turbo gaming to true turbo training.

Zwift has added structured workouts which can be completed on the virtual causes and with interaction,  If you slacked on a Sufferfest, only you and the Ant+ dongle would know.  Now, Zwift can tell you if you are hitting your power targets or not in a uncaring, black or white, pass or fail score card.  Harsh, but needed.

As the Zwift community grows, the number of HIITs, workouts, self test and so on all builds to the strength of Zwift as a training platform.

For some of the other options out there, I still like the Sufferfest soundtracks, in your face encouragement and humour - something that Zwift lacks.  Combining the two would be perfect, but not feasible.

Training Peaks appears to be the holly grail of training programs, and rightly so with the limited exposure I've had to it.  As TP is a bigger beast with larger subscription costs (I "like" turbo'ing but I prefer the road), it's harder to justify.

Turbo training is part of training, but not the aim.  My target is riding Eds-Lon, not KOM'ing Watpoia so it service the purpose and using it in this way will mean less time in the garage while being able to benchmark what I can do.