Saturday was a good day.

In a brief update, last week was a good week.  Wednesday was the 3 hours test (see here) which did me good.  Thursday legs felt sharp on the ride to and from work on Thursday and Friday was a rest/eating day.  Which lead into Saturday.

The plan had been to head back up towards the >400 km mark so I plotted a 300km-ish course around the Fens and back home with a second loop to top up over the 400 km mark.  In other weekends, I'd found one of the biggest hurdles had been clothing - too hot during the day and warm at night or cool during the day and freezing at night?  I had learnt the lesson so opted for a big loop plus a smaller loop depending on fatigue, time and energy.  The benefit would be a second punch with switched kit, the downside would be the mental battle of "do I have to leave the house again????" 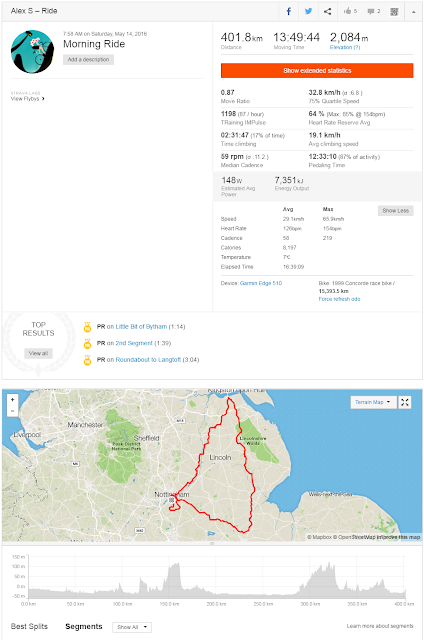 So how did it go?
Looking at the numbers in review, I'm not sure.  It's my second longest ride to date and my power, speed and energy did well.  Although I didn't do 260 miles as planned (250 miles instead) what I did do I think was with a good quality so rather pleased with it.  The riding into the wind and tail wind heading South down the Fens kind of nullified the wind advantage/disadvantage so possibly a fair comparison to other rides.  Although not as long as the 438 km from a few weeks ago, this ride was more "measured" as I tried to stick to around 130 bpm for the first 150-200 km and ignore all other metrics following on from how I felt with the test the previous Wednesday.

There was a couple of bad bits - wrong drink choice at one point - but nothing nothing crushingly bad (there's an update pending with the real details).  My Sunday ride was a lot more relaxed (2km to the park and back with a 4 yr old on a tag-a-long and a 6 yr old spinning freely) and my body is bouncing back relatively quickly.