On December 23rd, while everyone else in the office was scoffing mince pies, making sure the family vat of Roses had been emptied and having another round of high sugar sweets, I was on my calorie counted program.  Why?  To make sure that as the year progressed I can replicate my day to nullify as many dietary effects as possible.  As testing on December the 23rd will be replicated again, I don't want to try and find mince pies in June.

By mid-day when others were drifting home to their families, I met up with Lynsey to do my first round of testing - FTP testing.  We had hoped to include a VO2 max test at this point too, however tech gremlins crept in to stop the program running.  Still, we'd have a benchmark to work from.

First off was anthropometric testing - height and mass and skin fold tests.

In terms of results, I have (had) a body mass of 70.3 kg and a height of 175.8 cm.  The mass will be variable, but at the age of 34 the height will be more hard set.  My mass naturally fluctuates by around a kilogram depending on food intake, hydration and defecation but will be an area open to challenge.  For context with the UK population, the Office of National Statistics states that the average UK male is 38 years old and 175.3cm in height, therefore I am very average.  In terms of mass, the average UK male is 83.6 kg so I am underweight compared to the average male.  On the simplistic BMI equation of mass over the square of my height, I have a BMI of 22.7 (within the health range) compared to the average UK male of 27.2 (over weight).  By definition, my height and mass are "average."

For reference to where I was being drawn on and pinched: 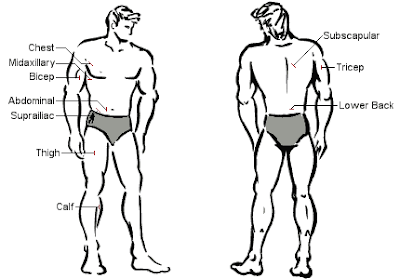 In superficial vanity, I'm the typical skinny cyclist - I'm not going to be winning nay body building comps.  Analytically, I look like this: 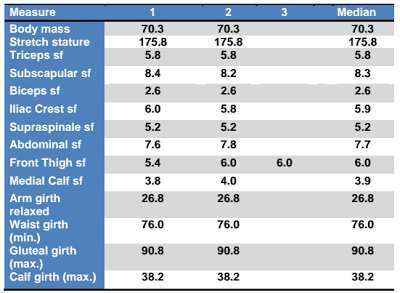 To take the skin fold numbers into something more meaningful and comparative, there are two ways of looking at the result.

As a skin fold to % body fat conversion (and the value that everyone always looks at as the headline figure) the % body fat gives 6.5% based on the Yuhasz equation.

What does a skinny Dr Stav look like in action?  Gratuitous action shot time. 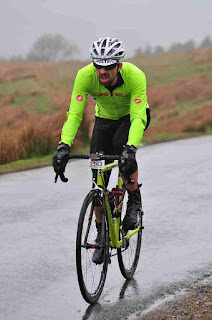 Ok, I’m wrapped up well here, but approximately in the same form at the Frew Whitton in May 2015.

I’m pretty much in line with the expected for someone with my motivations, aspirations and road bike experience.  I am below the average national mass for my height, but that’s not surprising.  Physically I am average by height and weight for a healthy male.

So recommendations from Lynsey:

A bit of background.  The lactate threshold (LT) data in conjunction with the anthropometric data will give a number of matrix which will help baseline, measure improvement and predict performance.  Essential the higher the LT the longer I will be able to put power through the pedals and onto the road – the more power, the more potential speed and/or longer until exhaustion.  The lactate value is crucial as it shows at what point my body can no longer counter balance the change in pH of my blood as lactate is produced by the muscles – this is my buffering potential.  Sticking at a power output below the LT would allow me to maintain performance for a longer time period but at a slower speed.  Going above it I may have burst of speed but I will fatigue quicker.  By training to increase my buffering capacity I will be able to increase my LT therefore sustain higher power outputs (and speeds) for longer.  As the LT will determined through interrogation of the curve (Thank you Lynsey!), the point at which my lactate changes will correlate to my Functional Power Threshold – how much power can I produce before the LT.

This test was a 35 Watts ramp of 3 minutes per power setting starting at 95 Watts and seeing when I could no longer maintain my rhythm while having a blood test and score card at the end of each section.  Simple.  The results look like this. 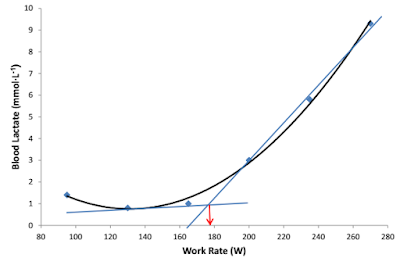 From this, it can be shown that my lactate threshold occurs around the 180 Watts mark.  This equates to a 2.6 W/kg output at LT.  My maximum output was 268 Watts in this test.  Now I could use every excuse under the sun here (I’d recently been ill, it’s the end of the season, the room was too hot, I had a spot in an awkward place etc) but this isn’t an amazing score.  It’s more human then chasing the wheel of Big Mig in a TT.  For comparison, expect a pro cyclist to be much higher.  For some data (again, cycling blogs are fantastic for error prone data and famously bias) the likes of Froome may have a 30 minute critical power of around 393 W or 5.7 W/kg.  Makes me rather pedestrian.

I would like to go to VO2 data here, but as this will be done shortly, I think it would be better to hold off for now.

Heart rate data.
As the power ramps, so does heart rate until a plateau and heart rate max.  Based on my predicted HRmax by 220-age I should have a predicted max of 186 bpm.  This is a very rough estimation rather than a hard fast number as human variabilty can skew this value significantly.  In reality (with the exception of sensor error), I have rarely seen my HRmax­ approach this value.  Typical HRmax­  is more likely to be in the order of around 165-170 bpm.  From the testing conducted, my heart rate was taken at the end of each power setting as shown. 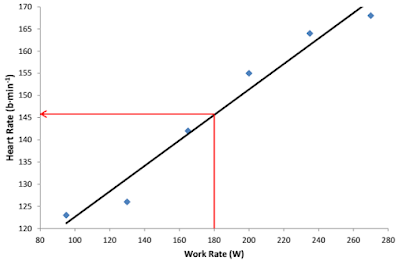 From this, my heart rate at lactate threshold is 146 bpm or 78% of my predicted HRmax.  However based on the maximum heart rate of the observed data (168 bpm), LT was reached at 87% of my “true” HRmax.

How much pain?
For the final set of results, at each power setting I stated my Rating of Perceived Exertion (RPE) on a 4 – 20 scale based on how far I felt.  This may be subjective (I’m sure more egotistical men would down play the pain) so I tried to answer honestly.  From the power of LT I rated the RPE as 14 – “somewhat hard.”  This suggest I still felt fairly comfortable at the LT.  In my own opinion (and I’m sure Lynsey may have other ideas) I tend to think of the RPE scale more logarithmic – although it is painful, I kind of like going to the LT or beyond but think the area above LT ramps much quicker than below LT.  This isn’t an area I know enough sport science about, but I know Wyrnose Pass Hard Knot pass is a 20 (and then some!). 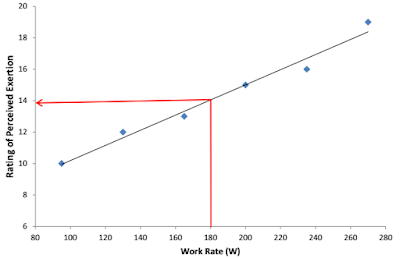 LT, HRmax and RPE summary.
In LT terms, I have work to do but the base line is now drawn.  On my own crude data analysis from 2015, my performance ramped through the spring to an early summer peak, ebbed slightly then re-peaked late summer/early autumn based on my average speeds and freshness feel.  The point I am/was at during this testing is above the 2015 start point – my 180 W or 2.6 W/kg is the lowest I should be through the next 7 months.  May be I under performed in the test due to XYZ or it’s a true reflection – only repeated testing will show.

For pushing into this challenge, I am expecting my LT to increase with training therefore aiding my speed and ability to resist fatigue.  At some point there will be a natural ceiling to this value but at the moment there is certainly head room.
For HRmax it will be interesting to see how this chances.  Although my actual was below my theoretical, my range is shifted lower and I don’t recall accurately seeing my actual ever approaching my theoretical.  Time will tell.

This data is giving the targeted information required for the next steps.  VO2 max testing will come in the next day’s/weeks but from this data, heart rate zoning for training will be refined.  Unfortunately I don’t have the training budget for power cranks or meters, therefore heart rate zone (rather old skool) will be the method of choice to push the LT curve to the right as far as possible by July the 9th.

Close.
In closing, firstly a massive thank you to Lynsey for putting me to the test – all this data and analysis is coming from her work using me as a case study, so thank you.  I can’t wait to see how this changes over the coming months.  Where will my fat go? How much power can I produce? How long until I bonk? How much sweat will pour onto the lab floor?
Secondly, my physical form is part of the whole project equation.  I’ll address this in another post but equipment choice will also factor.  Even at a low LT of 180 W using a Pashley is going to be very different to a road bike so I am looking at where I can make my FTP work most efficiently for me, but that is yet to come.