I have (or at least developing) a new Paincave for the coming winter and spring.   Last year I had an "alright" working system since moving house - now I have an improved/improving version which should (in theory) be a bit more stable.

The PC has moved from GEM and now becoming PANDORA for Zwift.  GEM was buggered by a Windows 10 update and may now be dead.  As I had previously been dual-heading from the GPU and the PANDORA GPU is a smaller form factor with limited bandwidth, the second screen is still causing me pain (do I Chromcast, Rasplex, HTC HD link, MHL cable??).   One massive advantage is that the HDD is now a SDD and boot speed is a fraction of the time and HDD read/write bottle necking has gone.  In other areas, the NAS/Plex server is much more stable (even if a little under powered) since being completely rebuilt and is now coping with Paincave media streaming, file storage archive/backup and family media server duties - in 2018 these roles are changing as Spotify, Netflix, internet enabled speakers and streaming form the internet have become more common.

The Colnago still gets the cast offs and eBay special buys (finally replaced the smashed Ultegra left STI from a crash in 2014 with a cheap 105 5600 unit) and cheap imports from China as a way of pushing through the power.   The Elite Mag dumb turbo - still dumb!

As part of making things easier, the previous turbo stand has become part of the home garage workbench and the screens have jumped onto the wall.   For cooling, I've finally incorporated the industrial blower into the right location (memo to self - need to make it more square!) and put a fan controller in a box into the system - now I have control, not on/off by plugging in/unplugging control.   Possibly a future tinker project is looking at how to change the manual potentiometer to a API controlled digital pot to mimic power output.  As cooling is taken care of, heating is still the tumble dryer doing a turn at the right time........

As the whole area is for Pain and DIY tasks, I still have some wiring to do, some more secure points to put in and I need to get the whole system to "just work," but clear progress is being made.

The kicker is the advancement of tech - I don't want to keep spending money in this area but as DVD quality became HD, and now 4K.......12K..........3,000,000K resolution, tech creep means basic specs age and what was good a couple of years ago is now basic.   What used to be a PC to run just a .mpeg file and a basic Ant+ recorder evolves into a PC capable of running Zwift and a suit of Ant+ sensors, streaming a .mpeg, broadcasting to Bluetooth headphones, while a bloated Windows 10 OS does one of it's endless updates, background processes that you don't need fight all for CPU space.   That's before thinking about any smart trainer........   How times have changed since my time in my shed on the hill, basic cadence/speed sensor, Creative Zen mp3 player, desk fan and a stopclock.  I often laugh at "modest" Zwift setups on Reddit for "new to cycling" kind of questions. 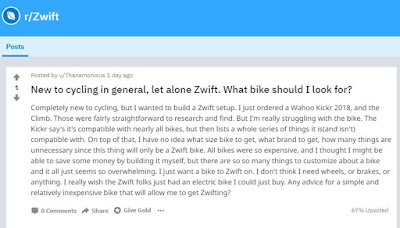 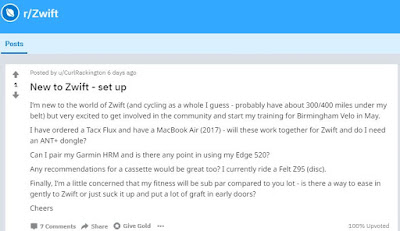 These two are pretty modest - there are endless posts of 4K 30ft LCD's, full gamin rigs, whole aircon refits, decorating basements, mood matching colour LED's, dedicated Pina F10's in over the top set ups.  If you have that amount of cash to invest in a Zwift/turbo..............what the fuck do you do for a job!?!?!

Rocky punched meat and training in the cold, because it was hard.   Cyclist should be the same.  If you do 500km on the turbo, you should be doing 10,000km on the road and spend likewise.   MTFU.