Back in the pain cave

Tuesday was the first return to the turbo for some time - mix of work commitments and this week has been the first week where a long distance, solo ride on remote roads hasn't been wise.   The tap out point is when I start to think "If I have a mechanical, can I fix it?"   Physically, I can and do ride sub-zero temperatures with relative ease.  I'm more cautious in the autumn with fallen leaves making road surfaces more difficult but it's not a reason to stop.  But if I do stop on an exposed road to fix a mechanical (puncture, broken chain, snapped cable etc) at points where my hands are cold and dexterity has gone, a minor fix becomes more major.   On a remote road int he Peaks, the next village can be a good walk in road bike shoes which isn't going to be feasible; I'll drop core temperature quick and risk hypothermia.   LDR's at -2 at night is break point, and this week we had the first break.

Instead, I did a turbo session - Zwift, Sufferfest double bill.   Intention was:  Do 1hr Sufferfest with optional extension, while on Zwift see if I can do Alp D'Huez.

Coming off the back of a commute (and kids to bed), not a bad effort;  SF Fight Club and Extra Shot plus a Alp summit and back down again with a bit of Tron Legacy.

For the diet and W/kg perspective, data on the bike was good to see, if a little abstract related to RPE and "feels."   After weeks (months!) of LDR's on Wednesday nights and little HIIT training, refreshing the process was a little different.  I used to be able to bash out 2+ hrs on the turbo in HIITs with fade around 105 mins and really grit for the last 15mins.   This time, 60 mins was enough, extra 20 mins using Extra Shot was more of a mental "I've got this far, I'll regret it if I don't" approach - I couldn't effectivly do a second 60 min HIIT.

In terms of where I am physically and fueled, my mass has dropped 5kg from 71kg (around 10th October) to 66kg (23rd November).   Going into the turbo session, I was partially fueled and used iso-tabs (none-carb) and ate after.   Doing HIIT's half starved won't have done me the most favours.

On the Fight Club workout, my power was down compared to previous thresholds however weighing in at 66.5kg my W/kg has decreased at the slower rate - more due to the weight loss than power hold/increase.   The part of the HIIT which is a TT and climbs with increases, I used to be able to maintain around 240W through the intervals compared 209W this time.   A 30W low is pretty significant but Apples with Apples, going in starved compared to fuelled will have made a larger impact.   Based on W/kg, this equates to drop from 3.36W/kg (Feb '18) to 3.14W/kg (Nov '18) averaged over the 4 intervals. Running at around 3.2 W/kg and having the punch to increase felt good but the ability to maintain it has been slipping.  Typically I have found that without HIIT's my power reduces going into the winter.

Conclusion:  work to do, need a more standardised comparison testing method and accountability.

After Fight Club, yeah, no remaining power left in the legs to do a second run, so I did a 20min Extra Shot for fun and watched a bit of Tron: Legacy to complete Zwift and drop back down again.

Why Tron?   I love the visuals of it, remember watching Tron as a kid and the soundtrack is good for turbo training to. 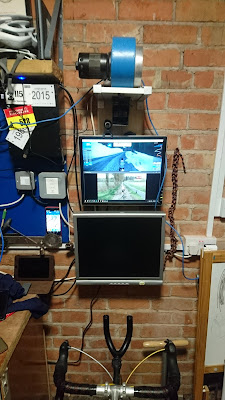