Task 2 - Aftermath and a Man With A Hammer .

Question:  If I get on the Genesis, how far can I go before it hurts?

The plan was two fold.  One: Take an easier pace and see if I can stick to it and; Two: go for a long time, riding in the dark when needed.

I started the ride early, riding before Sun up and headed south to Leicester (around 30 miles).  Once in Leicester, Chris joined me and we started a sixty mile loop taking in mixed rolling roads.  Once back in Leicester, I rode the next thirty miles home solo.  I'd want to brag that with my super efficient, skinny end of season body, it was a walk in the park/pootle around the lanes.  It wasn't.

The ride went well, however there were some noticeable differences to my usual riding style.

In general, speed was lower, distance was 120 miles, I rode in the dark and the light and it drizzled most of the day.  Not too bad, and I met my targets.  I wanted to go to the fatigue point and I found it.  Success??  It was good to ride with my brother and having the company was very welcome, especially on a grey and overcast day  Oh yeah, the Man With The Hammer beat me.  That Fucker.

While sounding like an arrogant arse, I couldn't kick my brothers arse.  On any given day I should be able to drop my brother with ease on the flat, on a climb or where ever I want.  On the Concorde my accelerations are quicker, by rolling speed is much higher (around 5-6kph higher), my ability to throw the bike around is far better and the resistance is much lower.  On the Genesis, it can make me hurt.

The resistance on the Genesis is higher (more later) which dropped the average speed.  Unfortunately my heart rate monitor isn't working so I couldn't see the energy burn, but for any given distance the added mass (audax style riding with a Caradice Barley FTW!) I could tell I was getting through calories faster than I usually would do.

After riding 60's (milers) on the Genesis, I knew some niggles creep in - sore feet, saddle sores, sore shoulders etc.  The good news was that even with the effort made, length of time and peddle strokes made, my feet took it.  Instead of hot foot, I was fine!  My legs (although fatigued by the end) were still good.  But.....

My shoulders at around 9 hours started to go.  Energy balance wise, I fucked up.  The wrong layering made me sweaty but not sweaty, kind of clammy but wet drizzle coldy, but hot.  This buggered my hydration, fluid intake and nutrition.  By 105 miles ish, the fatigued kicked in.  At Bunny, the Man With The Hammer hit me hard.  With a big hammer.  That Fucker.

What I learnt:
My arse is made of leather.  Arse wise, the Genesis wasn't as bad on the long ride as I expected.  The resistance was high which tested me but the bits that I expected to hurt, didn't.  This is a good thing!

What I need to learn: 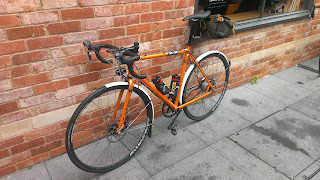