The start of May

As last weekend was the bank holiday, day are a little confused.  I even changed a work start time this morning which is slightly confusing and the weather was rather nice.  So what's been going on?

My day to day riding is still 45-50 mins, ~8 times a week with commuting.  The Genesis is slowest of the bikes at the moment due to wear and tare and the fact that it's heavy steel with a saddle bag and mudguard. I realised this morning that the Genesis is now well over 14,500 km and counting (closing in on 10,000 miles if you're imperialist) since I bought the bike in late 2012.   Various parts have been swapped, changed, mod'ed, upgraded, customised etc but I'm still on the same bottom bracket and headset and the rear hub gear has had one service around 7,000 km ago.  I'm not surprised that the Genesis is like resistance training!  Sometimes it feels like riding a dream, other times a heavy beast which loses pace at the slightest incline regardless of effort.  I'm not sure how long a bike is supposed to last, but ROI must be fractions of pence per mile by now.
As usually I train on Wednesday nights, recent mechanical issues how thrown in a few curve balls.  I ordered a replacement freehub after "the bad week" only to find my son had hidden the post office card in his coat for 4 days - I didn't get till the Friday and even then, there was an error....... So I swapped Wednesday night road to doing 8x 5min intervals on the turbo in the garage instead and listening to a bit of High Contrast nice and loud.

Getting off the road probably did me good.  It gave me something else to focus on, I got to play some loud music and distracted me from "the bad week."

As I put in my last post, I was intending to go North, but went East instead due to concerns over weather in the White and Dark Peaks with the length of ride I had planned.  I wanted to get back to the around 320 km region (around 200 miles) so set out to Skegness as an alternative, heading out via Lincoln and across the Fens.  By the way, Skeggy is hell.  Don't go there, it's grim.

For the ride, I have started to get used to the bar extensions and holding a lower position for longer time periods.  In speed terms, it's giving a margin of around 2-3 kph on most roads so I'm pleased with the change.  The other tech issue of the weekend was the swapping of the back wheel.  As I still hadn't repaired the Fulcrum freehub (wrong size!), I used the spare, heavy training wheel.

The ride was very mixed - tepid start, several hours of heavy isolated showers, hail storms, sun, shadows and then a very clear night with plunging temperatures. I had tail winds, side winds, head winds, breezes and gusts throughout the day but at least nothing gale force.  The downside of riding out to the east coast and across the Fens is the lack of shelter and the pan flat, featureless terrain.  If you look in any direction, all you'll see is the road ahead, where you've been and miles of flat farmland on either side.

When showers/storms move across the landscape, you see them miles off, feel the pressure change and brace for the wet.  During the ride, there was the highlights of Lincoln, the Lincolnshire walds and then the monotony of the Fens.  At the end of the Fens is Sandylands (not too bad) and then Skegness.

[NOTE! If you live in Skegness or the Fens, I don't mean to offend you.  There are some very nice people such as the local shop owner I chatted to for drinks, the chippie where I got food, the people of Spalding where I re-fueled and the people of Market Deeping on the edge of the Fens, but the plastic box caravan parks, trashy food at the pleasure beach, Elvis tributes in pubs that sell "a pint of lager with a free Jager-bomb from 10 am!" and beach tat that is Skegness, really isn't my thing.  For the sake of training, it's a target, but there a far nicer places in the UK to visit].

By the time I got to Market Deeping, I was having thoughts on personal safety.  I switch the Garmin display to show  temperature and as I rode, I could see the temperature drop to the freezing point.  Even though the Met Office was claiming a minimum of 4C, the country roads were clearly a lot colder, so as I blogged over the weekend, I went on the side of caution and called for collection.

The ride pace started well, but ebbed a bit as the day went on.  I was tempted to re-up the pace and go again later in the day, but then figured it would be better to tap it out than burn out and have another bad week.  Over all, it was a good week.  The turbo training gave a bit of a head space while the long weekend ride was positive (just don't go to Skegness, it's grim).

As it was the bank holiday, it was nice to have a training day plus two weekend days so it was great to relax the legs, take the kids to their swimming lessons, do work around the house and have tea from the fire pit.  My sister became a 2x mum, I finally fixed my mountain bike and the kids were on every 2 wheeled device they could find in the garage.  Mrs Stav and I did a tech ban (no internet) on the Monday which I'd highly recommend. 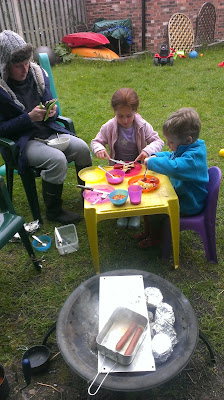 Last weeks no-road training did me well.  This week, the weather forecast is looking good and my fat wheels are fixed - MTB time!  I haven't had much chance, weather or day light to have a play on the green lanes so I'm going to take advantage and do some exploring while keeping the heart rates high.

I'm also itching to get the kids bouncing over roots with their bikes and some of my attention is looking towards post Ed-Lon - tandem riding in London at the end of July this year, 2017 Tweed Run on the 1938 Grub, in 2017 there will be our 10 year wedding anniversary camping trip on the Orbit tandem around Scotland and various minor rides in between.

After "the bad week," this was a good week.
Labels: classic bikes cycling data endurance training