I appear on Strava as "a cyclist" and I have been for a number of years now.  Ever so often I get the question of "but why?" 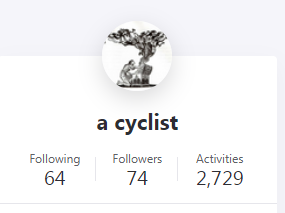 Couple of reasons.  Simplest answer is I don't want my real name to be on public lists in the app.  I'd prefer some step back.  Minor, but my answer.

In a way, the whole thing started as a bit of a joke.  I am a cyclist.   In the absence of a bike, I may run and I'll Strava hikes and walks with the wife and kids.  However, if I run with anyone, it appears as "Tom ran with a cyclist".   Or if I'm in a group ride there will be a list of names and "a cyclist."    Occasionally I'll ride with someone or a group temporarily (maybe draft a commuter, a few miles with a solo Saturday rider or tag into a club for a bit of recovery) while I'm on a longer ride.   My Strava will say "a cyclist cycled 300km" while random commuter or rider will have "Betty rode with a cyclist" on their ride.  A small joke.

Personally, I like the idea of being "a cyclist" in the sense that when on two wheels, sat on a saddle, I am just "a cyclist" riding a bike; no better or no worse than any other cyclist.  I have no more or less legal rights; or expectations of any more or less respect.   Cycling is an activity and open and accessible to all, so we are all "a cyclist."

What I do like is what "a cyclist" temporarily becomes.   Every time I sit on any bike (commuter bike, race bike, demo bike, mtb, hire bike, tandem or any other two wheeled human powered vehicle) I start out as "a cyclist."   How I end that ride can be vastly different; Everest'er; Fred Whitton finisher; sportive rider; 400km audaxer; tandem tourist; commuter; pump track hero; mountain bike explorer; LEL finisher.......... the possibilities are endless.  And those finishing titles rack up over time along with the stories and experienced, but those titles also fade.  I finished the Fellsman competition in 1999, but I don't claim to be a fellrunner anymore.   My credibility on those events have faded to not much more than a normal runner or hiker these days.

OK now I'll never not be a LEL finisher or Everest'er, but when I'm in my 80's on my Pashley trike going to the local shop with a basket and a shadow of what I can do now, I will still be "a cyclist", no better or no worse than any other cyclist; no more or less legal rights; or expectations of any more or less respect.
Labels: a cyclist cycling strava