Back into LEL training

Back to training and feeling better. 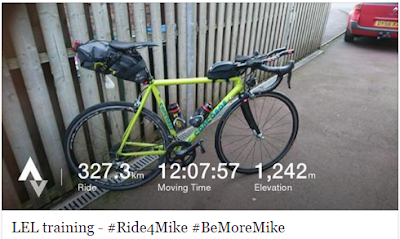 I admit, the last few weeks have been a little stressful - this has been more to do with professional life and employment choices, but last couple of weeks have been pretty challenging.  I had (a really quite fantastic) opportunity to switch employer and I was extremely tempted.  Some choices are very tough to make and possibly regrettable, but in long term objectives.........only time will tell.   At the same time, I had training with my current employment role, a massive mistake that appeared to need correcting going on, interviews progressing........the whole lot.   A lot of distractions, choices, changes in behaviors and re-evaluations of what to do and where to go.  As such, everything else in my personal life was maintained, but not progressed.   Physically I good, but mentally it's been a struggle.  Time to move on something more positive.

Just because all this has/had been going on, it's not like I've been idle.   21st of March was a Fenland fight, time to move it up a notch.


Catching up with Lynsey.

On a far more positive note, finally managed to catch up with Lynsey!   After missing each other with various things going on, finally caught up with Lynsey over a drink at Loughborough Uni.   Yep, sitting in a student bar, I can tell I'm now an extra-light-light-weight drinker.   Good news is that we're teaming up for another round testing and training with Lynsey and Loughborough Uni supporting me for the next 6 months.   Time to start back in the lab!   Time to be drawn on, skin pinched, blow through the gas bags and spin the legs.   It's going to be fun.

after all the stress of work, sweet sweet stress relief.   I have been maintaining the regime of training at least one night a week - either a 110km road session or HIIT's on the turbo.   As work and interviews have pretty much screwed up the last couple of weeks, I've fitted in HIIT's using Sufferfest and Zwift where I can.   The PainCave is working well, and with the headphones up to 11, hell yeah!

As I put in my last update, Mike was one of the people who inspired me to challenge myself.  I think his death on the back of everything else that's been going on recently was just a bit too much of a downer.   But one of the things that has come out of it has been the social response.   I hate the fact that Mike has died, but seeing the connectivity of cyclist globally through Strava, Facebook, Reddit, Twitter and so on has been mental.   15 years ago when I was a kid in the Peaks, cycling was a dark sport - you read Cycling Weekly or Cycle Sport when they were published, or waited for Ceefax to update to find out what had happened that day at the Giro.   In 2017, seeing the cyclist honouring Mike globally on Strava, Facebook, Twitter and Reddit is something that is amazing.  Donations to his family and charity have come in and the unity between cyclist is heart warming.  His inspiration will go on for decades to come.

Last Saturday was my return to the Fens and reuniting with my Concorde.   It was fantastic.

Weirdly, this is the first time I've turned the cranks on the Concorde since unclipping in London on the 10th July last year.   I had intended on riding and racing on the Concorde though the end of 2016, but switched to the tandem for my remaining events and once the weather deteriorated, stuck to the Blue Steel and the Genesis.  The Concorde maybe 18 years old, but my God she's fantastic.   Getting back onto the saddle was a bit of a change from the Brooks, but the feel of the bike is unmistakably the Concorde.   Kitted out with the Apidura, dynamo light and H Plus Son front wheel, it had a real feel of "come on! Lets bring on the next battle!"

My plan for 1st April had been to complete the ride I had started previously - out round Peterborough, up the Fens, out the top near Minting, turn to Lincoln and home.

I'd rate at >75% success.   Head winds hit me on the way out down to Peterborough but stopping at Swartry was a good choice.   I chatted with a local at the village shop who many years ago rode with Peterborough Clarion.   He had a good opportunity to reminisce while I ate and headed off to the Fens.  Riding up the Fens was smooth with a couple of stops to try out different foods - one of the ride objectives.

Feed wise, I ate at Crowland, Spalding, Woodall Spa and Lincoln.   I had been wanting to avoid the typical urges of junk food (which get boring) and try and find things like pasta pots due to keeping the stomach open and avoid heavy claggy foods.   To a degree it was working...........

Last 80km after Minting (best name on the route), things didn't appear to be settled just right.   I thought it was fatigue so stopped in Lincoln to find more food - I hate to admit it, but McDonalds.   They have cheap calories and I fancied a BigMac, even though McDonalds didn't like my bike in store.

Getting home after 203 miles kind of showed why the last 80km had been rough - pretty much nothing in the last 100 km was digested when it hits the pan. 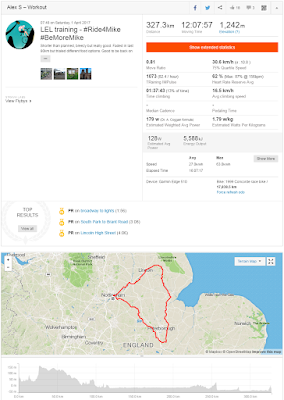 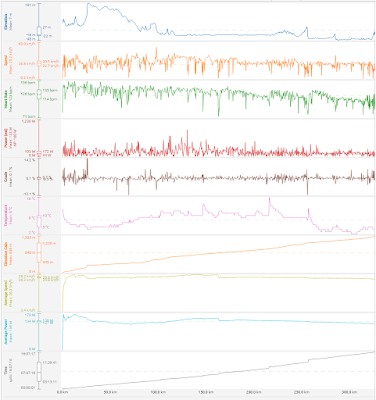 As I mentioned last few weeks had been tough so for a recovery ride and a bit of a Strava joke, I did this. 😁 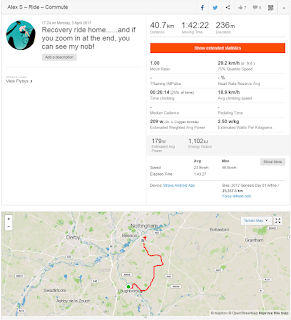 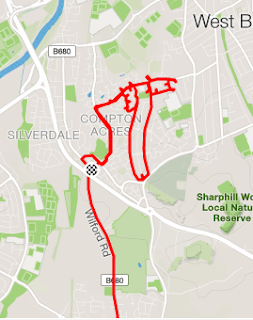