This year I got a place on the RideLondon 100 again, but this time I gave it a twist - I nominated Anna as my tandem partner so we crewed it and had an EPIC ride.   It was a huge buzz and very different to other years. 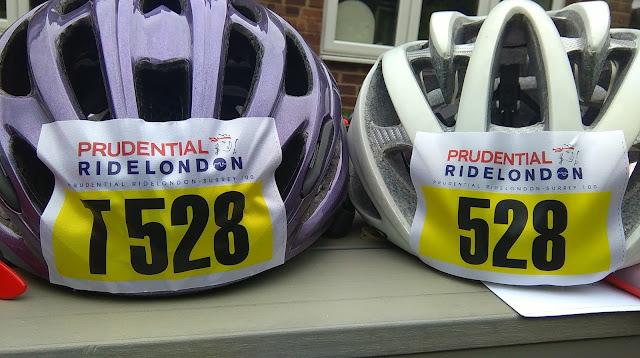 So as an overview of the weekend:

We got ride of our kids!

We drove down to Woodford on Friday night so Anna and I had the chance for a bit of a road trip and play music loud in the car.  No kids to complain about the noise or using having to worry about the swear words.   Bit of good fun!!  We joined Sal, Ged and Tandy and surprised Anna's parent who were also staying the night. 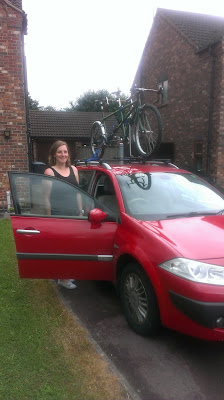 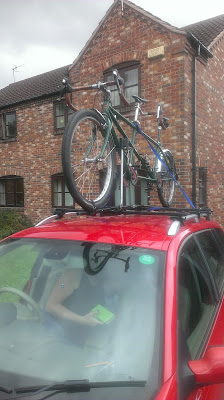 I still don't get London and London life.  It's a different place to the rest of the UK and although I've lived there, it's nice to visit, I still don't "get" London.   Cool to visit for a bit though. 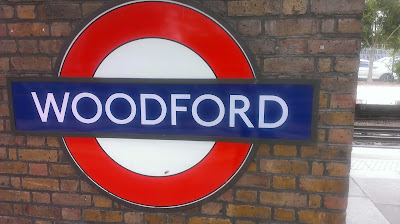 Saturday morning was rather chilled out and relaxed with breakfast in the garden. 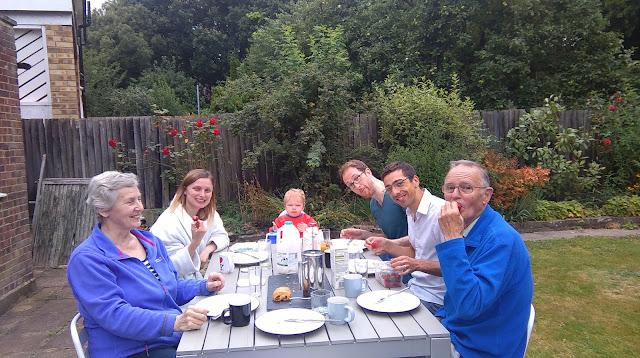 Along with the 27,000 others, we all had to sign in at the Excel.  But this time we were the "different" ones.  We had to go to the front of the lines of sign in booths for our special double pack to make sure we were together as a crew.  The sign in has been exciting in previous years, but this was a bit different - this year i got to sign in with Anna as a rider.   Anna told we "now I'm getting excited" at this point, because this is where you pick up you number, tags, bags and promo-books.  Got that, and you're on the ride. Then it was the show.   Shop fronts, things to try, bikes to look at, things to win, talks to hear, people to catch up with.......  We visited with Sal, Ged and Tandy and saw the sights, got what we needed and things we didn't.  Still love the free sunglasses.

I'm sorry I don't know his name, but there was a fella there last year with a beautiful trike.  He was back this year (although the trike was after some TLC so not on the exhibition floor) but it was fantastic to catch up, chat and be passionate about being on wheels.  He told me all about his charity work working with spinal injuries and what they do.  Check out their charity page here. 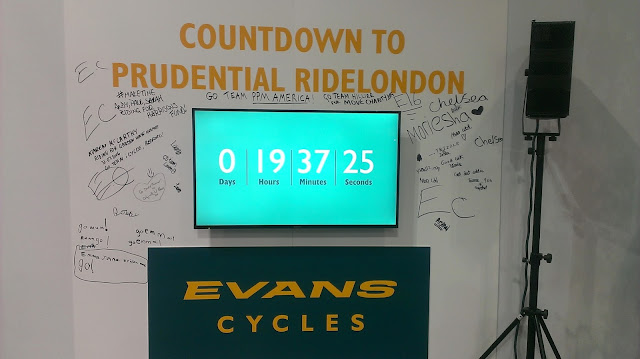 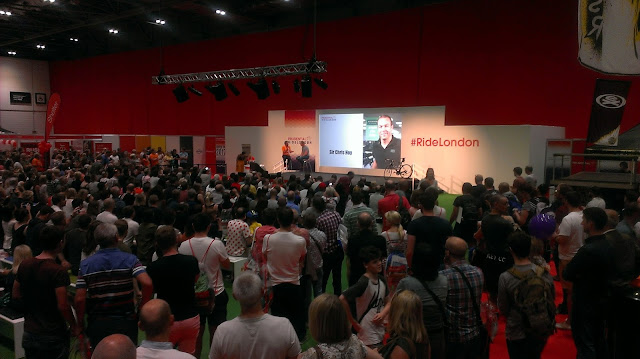 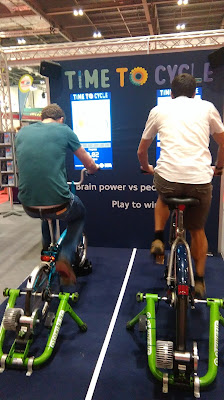 Early starts are an arse, but it's worth it.  There was the usual mismatched people in the wrong groups, MAMILS on very expensive bikes (but guts and hairy legs) and those who'd well honed training plans to execute the perfect ride.....and us on our Orbit!

Everyone does the shiver, the chat, and moves up ready for the off.  This time I was excited to do it with Anna. 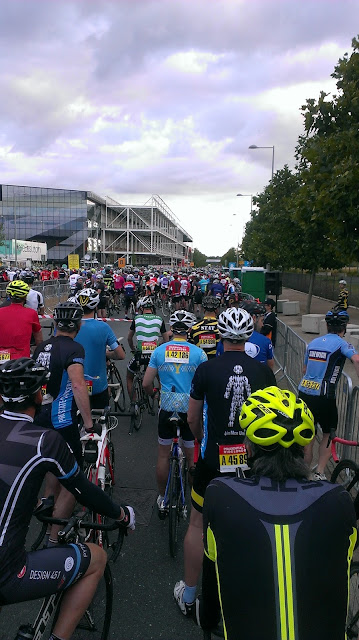 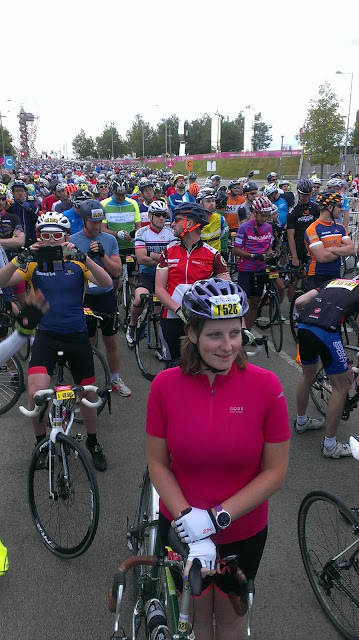 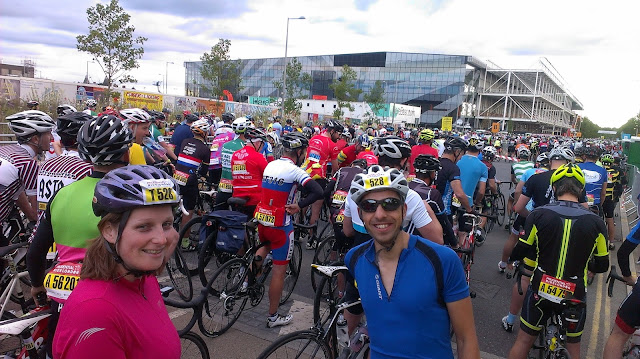 In terms of epic rides, I think this was one of the most fun rides I have ever done.  Very different reasons, this ride had very different challenges and a different character.   Never have I had the opportunity to take our tandem that fast with so many other riders around us on closed roads so on the run up, there were a number of bits I was apprehensive about..........our pace in packs on climbs, our cornering in tight town and city streets, our stopping distances, spatial awareness, ability to mix with solos.......

The ride itself was just brilliant.   We were noisy, and I was shouting out as much as I could for Anna to know what was coming up and those around us.  Anna has limited forward sight so relies on me to shout out what's coming up and prep for corners.  But Anna can also keep peripheral sighting for me: riders next to us, trains coming from behind, who's where, distances done and so on.

Captaining took a fair deal of skill and I think that's one of the best jobs I've done especially on descents where we were very quickly closing on other people. 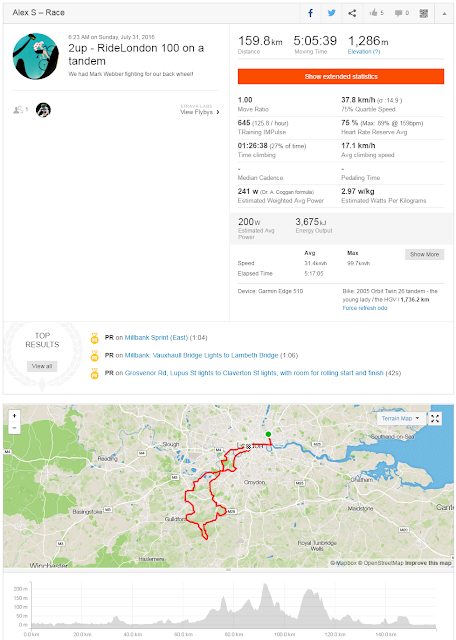 Yeah, Strava had problems with 27,000 people all trying to upload data (it's still not right after 24 hours but improving!).   Strava link

One of the things that Strava doesn't pick up on is the stories such as our brush with a celeb.  At around the 80 mile mark, we had a cyclist drafting us but on a small climb he came past us and said “Nice one guys!” with an Aussie accent, gave us a thumbs up and went on up the road.  Anna started hitting me and trying to tell me something so I thought there was something wrong with the bike, or she was trying to pass me something.  When the fella's were a bit further up the road and out of earshot, Anna started saying “that was Mark Webber!!!”   His group then went up the road but not far ahead of us.

As the road did a gradual descent back towards the Thames, a tandem picks up a lot of speed and easily out paces solo’s on descents and flats.   We closed on the Webber group with them on the other side of the road and I didn’t notice him.  Anna tells me that she heard Mark shout “THAT’S THE WHEEL I WANT!” and then darted across the road to get into our draft and slipstreamed us for the next few miles while we set the pace!  It was only in the last couple of short climbs in the last few miles did we lose momentum and he jumped past us and finish a few minutes ahead of us.

We finished with an official time of 5 hours 17 minutes but this was more about the screaming fun of riding in a group, the whole weekend, seeing the sights, the closed roads and the people supporting the ride. 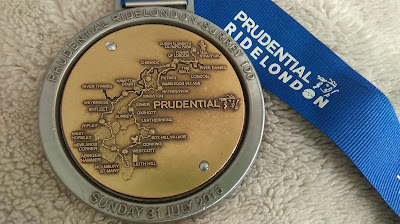 Park up bike, head for a pizza.

Anna was whacked by the end of this as we did go all out on our heavy tandem.  Chris & Em joined us with Jude in Hyde park before we did the slow ride back to Woodford. 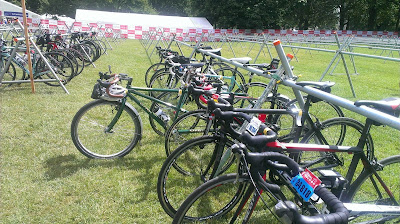 By the end of the weekend, we were exhausted.  Up at 4am, brilliant day riding and then the drive home.

Massive thank you to Sal, Ged and Tandy for the company and hospitality, the Pru RideLondon volunteer team for the manning of the course and all those who we rode along with.
Labels: cycling London Orbit RideLondon sportive tandem