November's done, one calendar month left and "that" season pending.  Although it's time to curb the riding, avoid illnesses and watch the waist line, I've tried to keep a focus through the last few weeks - some of that being rather testing with the crappy weather that's hit.

So for some stats.  As the last week of November has ticked over, bar minor rides (swimming pool with kids and so on) my estimated power in the last week was an average of 199 Watts.  Not bad considering the sub zero morning, high winds and occasional deluge.  This number doesn't take into account the weather and so on, but I've been making a point of wearing a HRM every day to aid the accuracy.

By the end of the month, my year to date has reached around 11,380km, with 45 hours of riding and 1,146 km in month 11.  Wednesday has been my peak day with between 3 hours 30 mins and 3 hours 50 mins in combined commuting and turbo training.  One thing I really noticed through early autumn was my drop in power when the bulk of riding was steady state riding on the heavier, higher geared Genesis.  To combat this, I've returned to HIIT training which made a big difference earlier in the year -warm up, double Sufferfest or a Sufferfest plus another training video.  With family commitments, weekend riding has lagged. 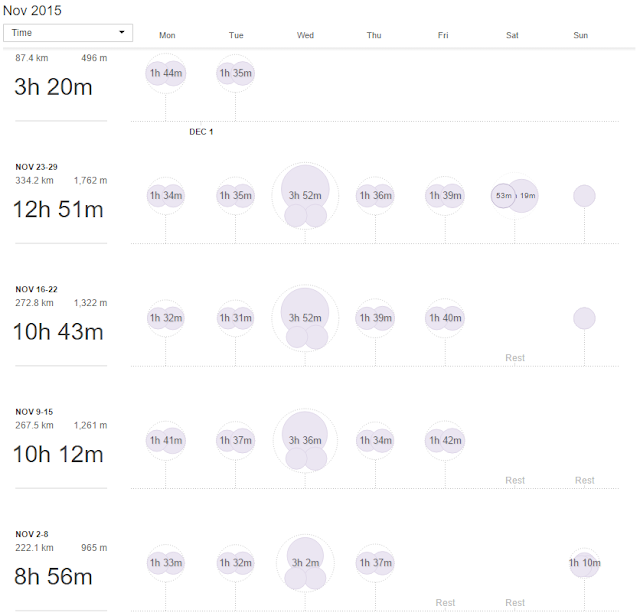 This year has had a far stronger end of year than previously and is seen in the yearly comparisons.  I've far surpassed my 2013 and 2014 totals and should go over 12,000 km total distance from all bikes, events and styles by the end of the year. 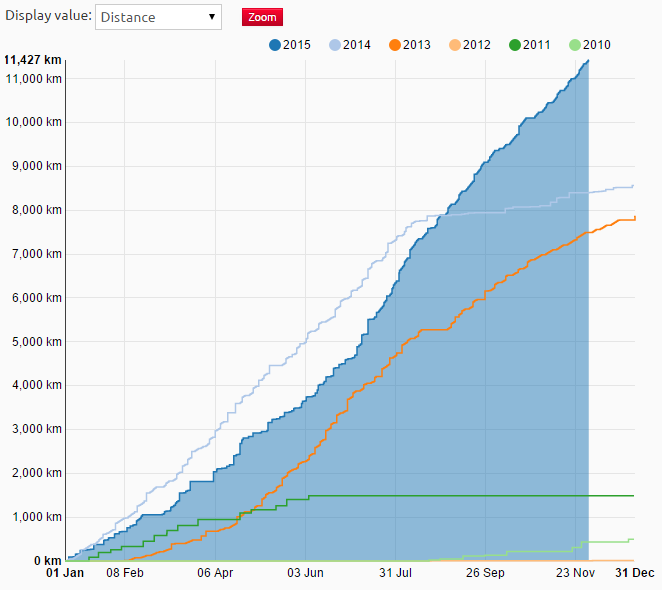 For this month, on weekly cycles and commutes, there has been a general trend of slowing paces - partially bike wear as recent weather has been gumming up mechanicals, partially as winds have effected times.  Also there have been times when I've done multiple days without resting and fatigue is clearly giving the legs a kick.

Summary:  November, not bad.  Things are developing, I've been robust throughout the month, the number of other riders has dropped a lot, tech wise I should have the winter sorted and my ideas for next year are being hashed out on Reddit and cycle chat forums.

December targets:  Every commute: ride.  There have been a couple of potential health niggles in the offing, so trying to ride protective as well a keeping an eye on maintaining the form I've kept through the autumn.  If I can get a long distance ride (one potential 200km ride, maybe??) I'll grab it.  And my god I miss not being on the Concorde, but that's another post.