As it's been the Easter period, things have been busy and progressing well.   A lot has been developing on and off the bike so I'll put up the highlights.

For this weeks mid-week ride, I opted for hills on the Genesis.   I've had hills on my mind for a while, and as the clocks have changed and I fancied switching from the Six Hills - Newark run, I headed out west from Loughborough instead.   My ride was taking in Breedon on the Hill, Burton on Trent and then back in to Notts via Sawley.  I kitted using my new Perfetto jersey and the Apidura, prepared well and rode well and felt good throughout.   Even with riding on the heavy bike, I'm starting to feel the fruits of training - a lot more comfort, ability to push on further and feeling fresher at distances where previously I may have been flagging.   Probably a mix of better physical strength and a stronger mental attitude, it's working.

Kit wise, it's the time of year where in the early morning, dusk and in the shadows, temperatures can feel like low single digits, but in the sun, it can feel good double digits.   This has lead to more reliance on the Apidura, switching layers and teaching myself to think on the wheels and plan what I'll need when and where.  It's working well and the Apidura is now feeling more like a war chest to deploy to best effect.

Last bit coming into Notts, I caught a draft with four Beeston CC riders.  I must have looked a bit Nomadic with my set up compared to their plastic bikes, but the ease of riding on the flat run in was welcome - thank you guys!

By the end, my legs had a good healthy sting to them - just what I wanted for later in the week. 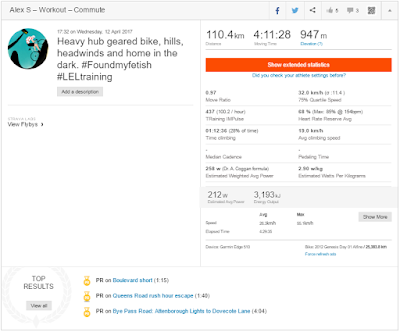 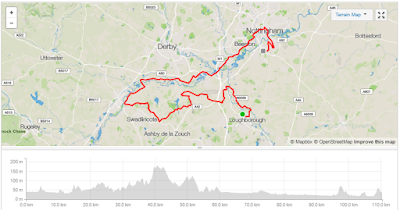 As a bit of a personal diversion, we had a family party!   As the kids have been on their Easter holidays, we took the opportunity to have a Chinese takeaway with 4 generations around the table - and we found out our kids are going to have another cousin!  Fun times. 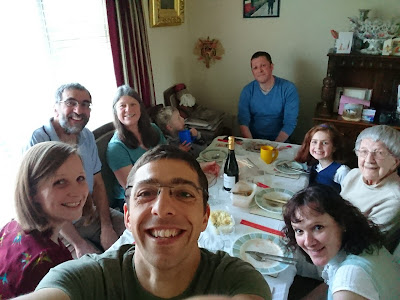 Hills and the Kristof plan.

Good Friday, I had a plan - ride up hills.   Prep wise was as normal, Concorde set up well, fueled from the party the night before and a route planned.  All good intentions - apart from not loading the right route into the Garmin.  I hadn't fully recovered from Wednesday nights ride which in a way was part of the plan.   I wanted to do hills with fatigue, as in LEL the hills aren't all at the start so I'll have to be able to climb when already fatigued.  The route that I had planned was a deviation on a route I was doing when training for the Fred Whitton in March 2015.  It mainly consists of heading into the Peak District and finding anything that wasn't flat.   As I've threaded through the roads of most of the Peaks in one way or another, improvising a route wasn't too hard.  The major differences between Fred Whitton training and now are; today I'm physically stronger but heavier, I've done a lot less meters of climbing and today I think much more about the long game over surviving 180 km.

Earlier in the week I had been reading this interview with TCR winner Kristof Allegaert.   The whole interview is worth reading, but the one bit which has stuck in my mind is the 30/30/40 ratio Kristof discusses in preparing for ultra endurance racing;


With this in mind, for this ride I reduced my pace targets to aim at ending the ride in the best shape I can maintain after a lot of climbing.  In LEL the major climbing is in the boarders region, however around Alston is probably the hardest gradient and the Thames valley wall on returning to London is where I'll be in the greatest pain.   The 40% that I need to work on is being able to carry on climbing when freshness was hundreds of miles back down the road.

On the ride, nearly all was good.  I stopped for a burger in Matlock, climbed a lot better than I expected, got pissed off on a narrow steep climb when a 4x4 filled the narrow lane and forced me to stop, felt comfortable and had good strength throughout.   For some reason I developed speed wobble on two high speed descents on the A616 which really scared me - I'm investigating why.

Towards the end of the ride I felt far better than I had doing similar routes previously and had I stopped again for major food, I suspect I could have kept going for another 180 km or more.  The data shows my physical performance compared to similar Peak District rides, but the bit that data doesn't show is the Kristof 40% - I feel like a very different rider to the Whitton days and felt like this was a well controlled " section" of training towards the end goal, not a dry run of the total ride distance and limp to the end completely spent.  It's difficult to explain the shift or put a finger on it, but it's a major step change from racing, Grand Fondo/Sportive riding and even last years Edinburgh-London. 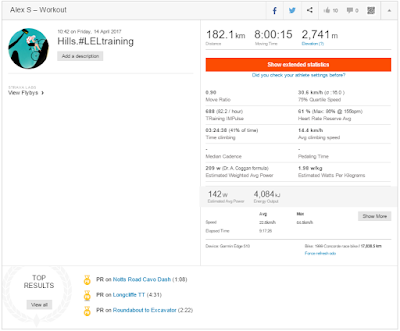 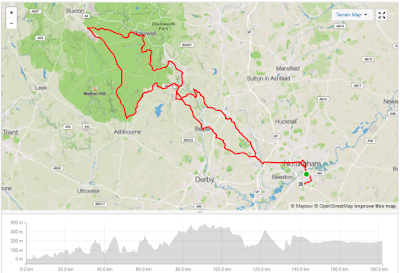 And now for something completely different.    As my in-laws bought us tickets for Disney on Ice, for Easter Sunday we were at the NEC.   For our kids and as parents, we are much more in the school of thought that experiences and doing stuff is far better than material goods - we have enough "stuff" around the house already so when the Grandparents offered Disney on Ice as a joint Christmas gift, we were delighted.

Over the course of the show, the kids had a real treat of an experience.  Below are a few photos - the photo of Rufus in amazement is one of my favourite photos of him ever. 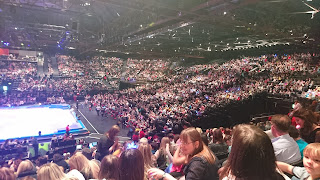 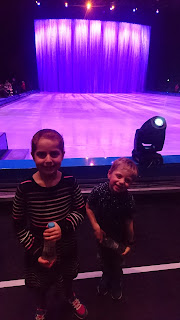 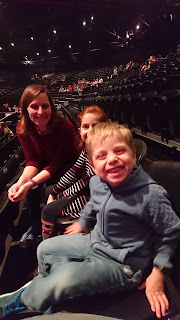 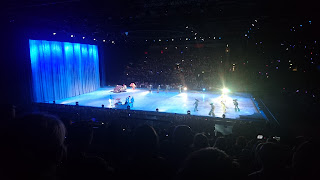 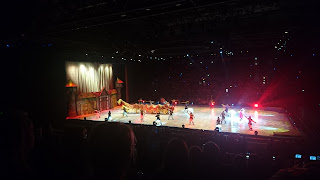 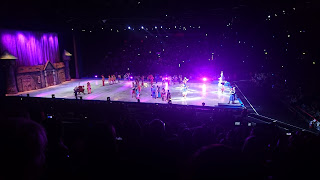 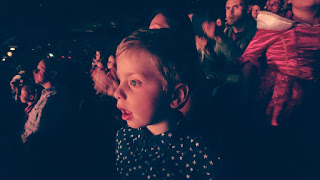