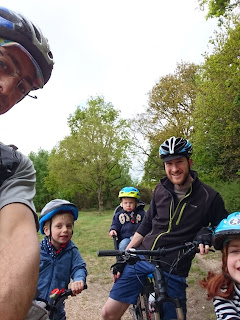 Last week had the mid week ride shunted from Wednesday to Thursday due to schedule conflicts.   No drama, just a different night.

Coming out of the bank holiday weekend, I'm feeling good.   Eating, sleeping and working well, Thursday night had the intention of roughly repeating last weeks 70 miler, but with the hills put later into the ride.   Local geography around Nottingham and Loughborough means that any hills realistically have to have sections of flat to get to and from them.   Most immediate climbing around my work and personal life tries to exploit any remaining uplands from the River Trent meanders, so there's​ a fair deal of flood plane areas to crisscross too.   My plan for the week was to disrupt the previous weeks flat-hills-flat-home by doing more like a figure of eight - flat-hills-flat-hills-flat-home.

Probably a mix of environment, form and mentality, but Thursday thighs ride felt good.   The weather was fantastic, I forgot extra snacks for the ride so ate extra dinner at work and had 500ml water on the bike, route is more familiar (day light!), I'm more confident and the Genesis is running well (except a missing top gear).
Getting home at 112km and it felt like a good work out, productive, progressive and well within my comfort zone even with the heavy Genesis.   Result!  Data below: 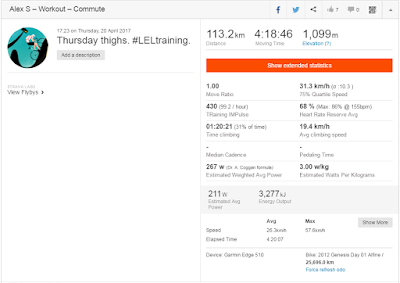 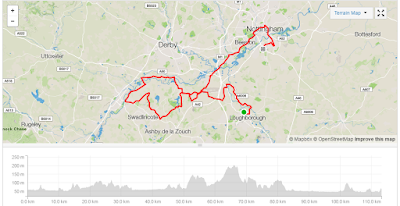 And now something different - an epic 6km ride!   On fat wheels!

We had some fantastic family news this week - my sister-in-law is now a 2x mum and I have a new nibbling.   As such, this weekend we headed to London for a family gathering and to meet Felix.   I had had a plan for a 180km climbing ride, but this was cancelled as I'm not convinced it would have been beneficial, especially with what's planned for the end of April.

Instead, Ged and I took 3 cousins for a short ride in Epping forest between toddler nap times.   Rebecca spun her MTB wheels, Rufus entertained from the tag-a-long while Ged had Tandy on a child seat.    Over the ruts, roots and bumps of the single track, it was really good fun and I think all of us would have been tempted to keep going if it hadn't been for dinner being cooked back home.   I already have ideas for next time......... 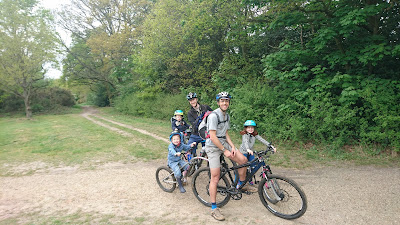 For LEL, this ride did nothing.   But what's far more important was the time, laughs, photos, social interactions and just pure relaxed fun of it.  All three kids had a blast with lots of grins, laughs and fun.  A 260km ride may improve me for LEL, but sometimes the 6 km rides are far more important.

For the next short term plan, the coming week is going to have a night away, an Activate Science event in Liverpool and a little disruption, but at the end of the week will be an epic ride - night ride up through the Peak District.  Can't wait!