FisherSci cycle challenge - we did it!

We did it!    As FisherSci L'boro staff we cycled and spun the distance of L'boro to Athens in a little over 1.5 days.

A bit of backstory.

Last year at the annual sales conference, FisherSci did a fantastic charitable event.   Where there's the usual corporate meet your counterpart team building exercises, FisherSci had us team building by building kids push bikes.  What they hadn't told us and what was revealed in the final day's presentations was that all the bikes we built were being donated to a local children's orphanage.   In the theater that morning everyone was taken back by the move - massive kudos to FisherSci.

Obviously for the next year (Athens at the start of 2017) the same surprised can't be done twice.   So our senior management team challenged the FisherSci staff to raise money, do charitable deeds and anything else they can for SOS Children's Village in Athens in a EU wide webinar last November.   I had an idea, Gary (my boss) had a similar idea........and this is what happened.

On hearing the challenge, my first idea was just to ride to Athens.  If I set off  Jan 1st I reckon I could have just made it there for the sales conference kick off date.   European weather would be hard crap, so would finding accommodation and food etc, but would be a hell of a trip.   Yeah, my boss would veto that in an instant and Mrs Stav would crucify me.   But Gary was think of something along the same lines - as a sales team, could we do it on static bikes??

The idea evolved and changed several times due to the size of challenge, local Loughborough support (massive support and kudos to Pure Gym in the Rushes for what they offered and did for us), greater staff involvement and publicity until the final format was 11 spin bikes in the Pure Gym main entrance and all staff getting involved and donating their time to see if we could do it - 8 am till 8 pm with 2 days available. 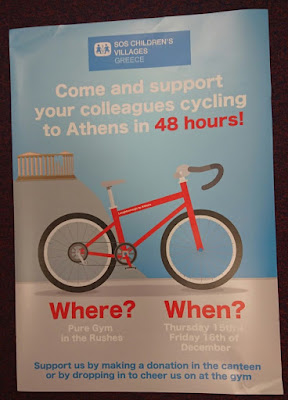 The event kicked off around 8 am yesterday morning (11th December) with Gary and Emma from our direct sales team plus various others from the support staff, customer services staff and staff from various other offices bagging the first Km's.   The flavour of the day was various office mates, departments and groups each coming and giving an hour of their time and return to work.   Some staff wanted multiple go's and came back, others stuck on longer, some groups rivaled each other while others pushed each other to do a little bit more.

As I was in the office until around 2, myself and the rest of our sales team jumped on the bikes around 3pm and started our stints.   Gary and Emma had been championing it all day but feeling the saddle sores.   Donna and Elisia did stints before picking up kids and I stayed on while others came and went.  Business peaked around office close time (all 11 bikes spinning) while by the end it was just 2 or 3 of us on the bikes, keeping the k's rolling in.  By 8 pm, it was clear that we were smashing the target well.   Massive Kudos to Gary and Emma for all the work they did on the first day and sticking it out through saddle sores and muscle pains - spin bikes aren't the most comfortable bikes!

Each rider did their stint, jumped off and shouted out their numbers to be added to the board.   Most were getting around the 30km mark while those spinning faster hitting the 40 - 50km mark (my god those knees must hurt!)

The second day (Friday 12th) kicked off around 8 am again and after the huge efforts everyone put in on Day #1, we smashed LE11 to Athens as the crow flies and took on the road route.  Some people were fresher than others, some had saddle sores from the day before, others were doing their first stint.   The early shifters filled the bikes from 9am and after riding down I joined them.   By 10am (ish) all bike were spinning again and the K's tumbling really quick.   At one point we had the marketing team with inter-team rivalries to score, the Spanish contingent with grand plans for 2017 and everything inbetween.  Those who were in their second day clearly had some aches and pains (those fIJcking saddles!) but on the whole everyone was chatty in in good spirits the whole time.

My approach in the last hours was a chance to listen to some music, keep the drinks going in, head down and just spin - thanks Noel Gallagher for the company.

By mid-day we were well on the way to the outskirts of Athens and searching for the hotel.   Earlier in the morning, riders were jumping off and adding their scores but as we got closer, Backy was doing distances on the fly - walk down the row of riders, taking their numbers and doing "km's remaining."   Each time Becky did the walk, we got closer until by around 12.20 pm, we'd hit target.   We'd (virtually) reached our hotel in Athens!

The charity that we have all be working for is the SOS Children's Village in Greece.  The charity is a fantastic organisation which has spread through Europe and the rest of the world.  The charity works by fostering children into families which grow into self caring and supporting communities where disadvantaged and orphaned children have the opportunities to develop in a caring and community based environment.  Their work encourages protection, independence and self sustainability to stop the next generation requiring their services.    A truly fantastic cause.

As we had buckets in front of the bikes and been collecting internally, should any readers wish to chip in too, please do.

I immensely enjoyed the whole event.  I sweated (a lot!) and now have a couple of sets soaked shorts and vest and stinking trainers, but it was well worth it.  Any employment has it's ups and down, highlights and gripes, but events like this and the build-a-bike in Malta (maybe biased as it was bike related) do give me a bit more pride in the company I work for and what we can do as a group of staff.   Bugger all my personal stats, performance data and the normal crap I usually blog about, FisherSci cycled from Loughborough to Athens!!
Labels: Athens charity DontLetItBeJoe FisherSci SOS Villages spin