Return of the Genesis 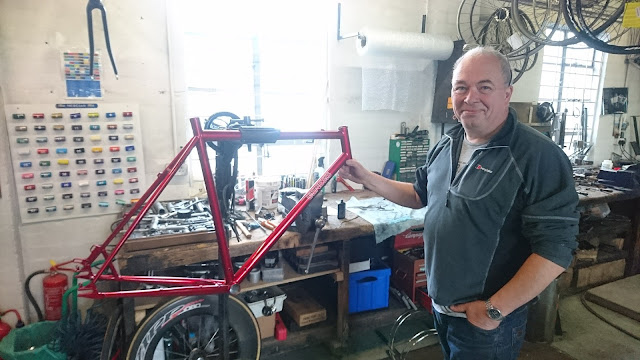 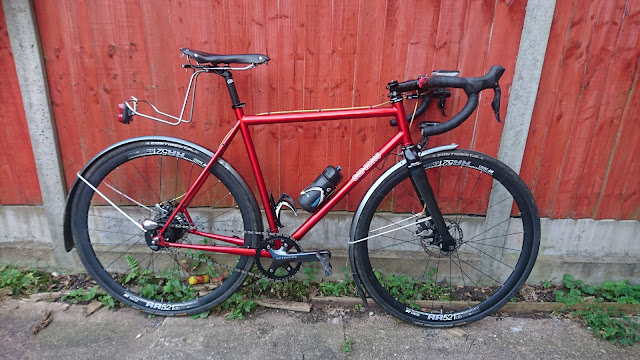 Over the past couple of months, the Genesis has evolved and a couple of weeks ago it fully returned to the road.  The reasons for the change stem from the bike fitting in buying the Enigma which showed how the Genesis wasn't fitted correctly and would ultimately lead to personal injury if i didn't address it.   Starting with a stuck seat post, the burning out lead to requiring a respray and while this was being done the opportunity was taken to do a few upgrades/modifications.

The bike frame was collected from Mercian in Derby and the finish is stunning.   After much deliberation and a last minute colour change, the frame is now a fantastic flamboyant red with white lettering and lost all the additional markings - I like the simplicity of it.   At the same time, the frame was drilled and reinforced to make as much of the Di2 and dynamo cable routing's internal as possible.

After picking up the frame, it took some time to rebuild with getting the correct cables and time to carefully put everything back together.   Now, the bike is near finished - I don't think it'll ever be truly "finished".

Since the completion of the rebuild, the bike has returned to the normal daily work duties, sharing the weekly loads with the Enigma.

Recently, the weather has given the opportunity to put the Genesis back to what it's talented at - long, crappy weather riding in the dark.   My protective friend is back.

Changes which have occurred since being taken off the road:


A massive thank you for all the work done by the Mercian team.

With the Genesis back in action, I am intending on running it on to >100,000km and it's getting there.  Potentially hydro-brakes next?   Otherwise, this bike is ready to run and run and run and run..........