May bank holiday weekend and I ticked off one of my bucket list rides and rode through the night again.  Pleasure tipped with pain!

For context, we had a family party planned for the Sunday, plus I wanted to do training in the 300-400 km range.   I had hoped for this weekend to be London-Wales-London however bookings didn't work out.   Therefore I did a ride I've eyed up for a couple of years - a ride linking together the Midlands and the North West.

Riding the Concorde to work Friday morning, I think my bike found its personality.   Inanimate objects get personified, and I think Harley Quinn maybe the personification of the Concorde in fighting mode with everything for the nght ride.   On the ride down to work, compared to the Genesis the Concorde felt alive, twitchy, fast, with a very real feel of "watcha doin? Wanna go a bit faster round the corners, I dare ya! But I'll kick your ass if you over cook it."  Pure, unadulterated, fun.   If I ever get the chance to have a custom built frame, I want it to have a little more stability, but that lively feelign the Concorde has - and possibly a subtle Harley Quinn theme.

The plan had to be ride straight from work, however a domestic problem shunted leaving to around 3 hours later than planned.   Regardless, I'd be night riding, just dusk would be closer to home.

Pretty epic.   First stint went according to plan.  Once night had landed, the temperature dropped so a road side kit change.  For a brief moment a farmer would have be able to look out of  his window and seen two moons.   Then onwards into the night.   Getting changed on the road side and self sufficiency is getting more normal and switchign from pure speed to tempered aggressive riding is working.

I reached Cheadle around 23:00 so stopped for a burger as I wasn't sure if the section from Cheadle to Crewe would have much opportunity for food or 24hr garages.   Listen to drunks trying to right the worlds, eat burgers, Google check in with family, adjust layers and head off again.

Between Cheadle and Crewe is Mow Cop.  It's a single "lump" on a mainly flat region, but as I ran up it as a teenager I wanted to revisit it - although I'd be riding over it the wrong way.    Glad to say I rode over it around 1am and had a clear view of the entire Cheshire plane.    One summit off my bucket list for now.

Between Mow Cop and Crewe I found a few scallies in the country lanes, but riding was smooth and comfortable.    Crewe had late night drinkers still around, a few route modifications before ticking off Middlewich, Kelsall hill and dropping into Chester via Tarvin.    On the way into Chester I stopped of at a 24hr BP for liquids and went on.

Now a gross bit.   For some reason, drinking the water didn't sit well with my stomach and caused me to vomit.   Yeah, bit of a problem as it may have made me more comfortable, but that's lost calories.   Shit.

Chester had late night kick out time ("She kissed ME!" "I love you man........"), and I headed up to Birkenhead via Ellesmere Port.   At Birkenhead, a quick chat with the booth man and a quick dive under the Mersey to pop out in Liverpool.
By now, early dawn was approaching, so for my sins I took a break in a McDonalds for breakfast.    This was the first (and only) point I had that "I'm tired" feeling.    After food and sweet tea, I used some former familiar roads out through Speke and on to Runcorn.  By the time I reached east Warrington, I was having food on the mind again, knowing I lost energy earlier and needing something inside me.    Fruit worked well in the first case, but when stopping again for more solid food, my body said no.   Vomit #2.
The last section to Manchester, I got the chance to visit my grandparents former home - first time in around 16 years - then headed for the city center and on to my parents house in the Peak District.
By the end, my legs were empty.   But a good ride done.   Speed through the night wasn't bad as I'm always slower and more cautious than in daylight.   Judging speeds and distance in the dark is harder, but the traffic being quieter and having the ability to "just ride" is more than worth it.   End of last year I missed riding all the way through the night, this ride reminded me why it's so worth it.

Pleasure mixed with pain.   I loved the ride, and riding through the night is just brilliant.   Doing this ride with the Apidura, preparation and everything else felt good, the vomit didn't!  Can't wait for the next one! 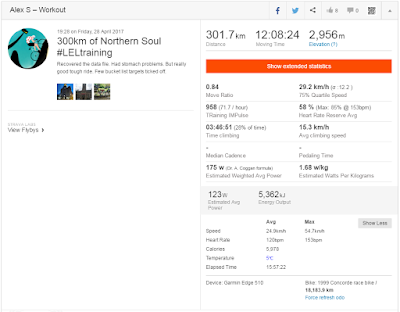 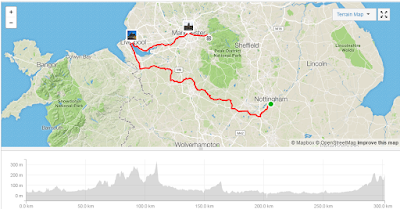 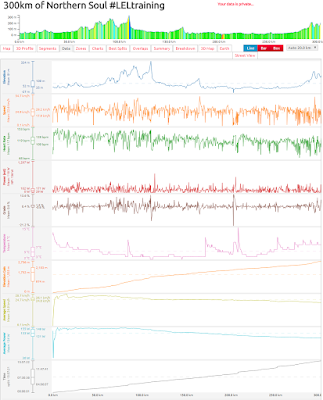