Life has been pretty busy recently so blogging rate has been turned down a bit.  There's be a job change, a holiday, this, that and the other so updating the blog has faded a bit.  Activity wise, I'm still on the wheels pretty much every day and the long overdue Genesis IHG service is now even further overdue.  At some point it'll rest long enough for the wheel to come out.

Last weekend was the Mark Cavendish Rise Above sportive - 100 miles in the North Wales hills with a lot of climbing.  Second year running and second year completed on our tandem.  It's a fantastic ride.   IF you get the opportunity to do it, I'd recommend it.

On the run up, as parenting is a bit of an art we only got rid of the kids mid last week so we had one practice hills ride last Wednesday - around 40 miles with 20 miles of that riding out to where the road went up and coming back again.  The bike was riding well, but gears are still a problem.  Over the weekend, I did manage to get some work done on the brakes (they were needed!) but the indexing is still a hassle.

For the Rise Above ride, the ride starts in Chester city center and heads out past the Grosvenor Estate.  The flat run out gives a leg stretch before the climbing really kicks in as you head out around Abermorddu.  After this, there's little flat until Corwen with Worlds End run in to Llangollen, Horse Shoe pass and the rolling roads around the area.  Horse Shoe we pushed on well, but the descent on the other side was fast.   A tandem gains speed fast..........and we were fast!

From Corwen, we rode the raises to the Clocaenog forest before a very quick descent to Ruthin.   This bit was one of our highlights.  As we crested and started to gather pace, we did the usual speed up, spin out and then tuck to eek out the aero you can on a 3 meter long steel touring tandem.  As we got going, I piloted us around all the solos until we lost momentum on a short rise.  Over my shoulder I could hear a rider calling to us: "Your guys are fuckin' INSANE!  I was maxing out on that and I couldn't get anywhere near you!"  For the next few miles we had fun on the rest of the descent shooting past solos with this rider getting high speeds all the way down.

After Ruthin, it was time for the Penbarras climb.  Yeah, we blew up on this one!   We got to the cattle grid and were directed around it before our/my heart rate maxed out and we had to push - lucky we did as playing before had spat out a rim brake pad.  On the Penbarras descent, we had hoped to beat our high speed from 2015, but traffic stopped that.  Bloody Lexus.......

The rest of the ride was pretty cool with Cheshires country lanes, sights and sounds before returning the Chester.

Brilliant way to spend your birthday! 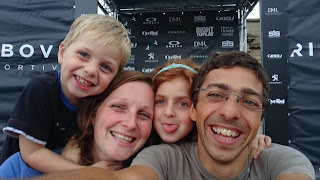 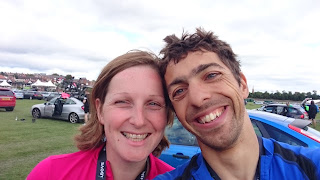 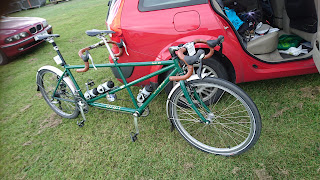