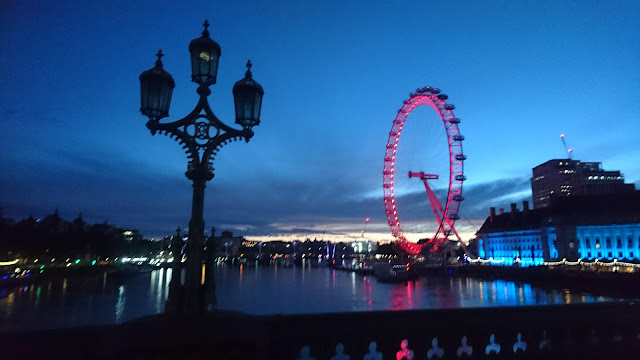 I have a love/hate relationship with London, but last Friday night I cycled down from the midlands through the night, getting to central London around 3am.  For how much I dislike London for it's stupidity of SUV's in city streets, seeing the quiet roads between 3 and 5 am, flags out ready for VE day, sunrise on the city towers and smelling the bakeries warming up, I love the city too. 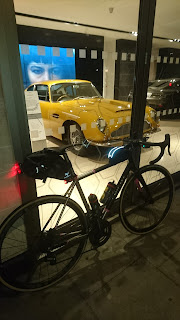 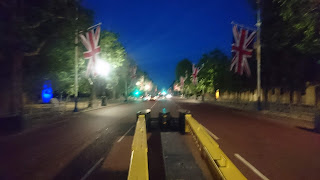 The beauty of riding through the night is the snippets and snap shots of life you don't normally get to see, and being a lone lost dot, it's yours to take in.  Riding down through the midlands and through to the Chilterns was typical of my normal night riding styles - screech owls in the woods, hares in the verges and traffic dropping.   Once through the Chilterns, I approached the A41 and A5 - both roads I would avoid at all costs during the day.

On the main A-roads heading into London, the ride took on a very different character at 2 to 3am.  London is sprawling.   This means on the approach, the urban heat island effects kicks in a long way out and the air warms.   The street lights become constant, and the people in the street switches from late night drinkers to night workers and very early wakers.   As fast, open A-roads slow to traffic lights and junctions down the famous Edgware Road and time passes, clubs kicking out gives way grocers starting to set out their stalls.   As Saturday was still in Ramadam, the Muslim communities were already wake to eat before dawn.  Stopping traffic lights I had glimpses through doorways of morning prayers at mosques, Muslim shops selling and offering tastes of food and people around from very early on.  Moving into central London, the Muslim communities reduced, expensive apartments and shops became more apparent and the inner London ring roads.

Reaching the Hyde Park area, I found the Aston Martin shop before riding down Constitution Hill and going onto the Mall.  The Mall has a bit of a special place in my mind - Prudential London 100 finishes here with my highlight of rolling across the finish line with Anna on the tandem, and I finished Edinburgh-London on the Victoria Memorial outside Buckingham Palace.  Very happy and proud memories!   This time, the Mall was barriered for the VE Day memorials and the controversial Donald Trump visit.   At that time in the morning, the Mall had all but a couple of people.   I cycled under Admiralty Arch, past Nelson and Trafalgar Square and down to the Thames.

On Westminster Bridge, it was the quietest I'd ever seen the area - a couple of tourists on the bridge but no one else.   The lights on County Hall and the Eye looked fantastic and the still morning meant that there was hardly a ripple on the water.

On the south bank, I've hardly ridden or explored the area.  I got lost a little but saw urban foxes, the last of the late night burger bars still serving and the start of bakeries baking that mornings bread.   Turning north, I have always wanted to ride over Tower Bridge but never had the opportunity.  Riding onto the bridge is a fantastic sight knowing the engineering going on inside it and it's industrial history.   Real goosebumps time as I could see HMS Belfast, City Hall, the Tower of London and Alexandra Dock.   If you're a Zwifter, the graphics are nothing like the real thing.

From here, I headed to Look Mum, No Hands! which was obviously closed being too early but I wanted to stop there just to see the place.   Shoreditch was trendy, hipster style - I'm not so hip.

From there it was a ride out past the Lee Valley to Woodford Green.   I was too late/early for the Caribbean jerk chicken in Leytonsone area - my plan had been to treat myself to some chicken had I got to the area around 3 am.  But as I set off later than planned and seen a few sights, it was around around 5am by the time I rolled through - it'll stay on my bucket list for a bit long, next time maybe?

From there it was Woodford Green and sleep.

An absolutely fantastic ride.  I loved every km of it.