I'm European.   On a bit more local level, I'm also British (with a very mixed background).  As the weather has turned to sunny and the commutes are warmer, I've been enjoying using my blue steel bike.  Why?  The Genesis is in for repair, I'd prefer not to use the Anglo-Italian super bike for commutes and..............hell, why not?  My back up bike is my 1984(?) blue steel frames bike, custom built in Coventry for a racer.   I purchased it from a cycle jumble a few years ago and built it up using spare parts.   The ride is smooth (853 steel for the main frame) but the handling is very aggressive; relax and it'll pitch you into the ditch.   It has a mix of parts - 1980's 105 BioPace cranks, 6600 Ultegra mech and brakes, Dura Ace front mech, a down tube shifter, a 105 brake lever and a 5600 105 right brifter.  It's also inherited the Fulcrum Quattro wheels and has an extremely elegant 3T Motus stem.

With the warmer weather comes less baggage which means no extra jackets - time to down size on midweek days from the Carradice Camper Longflap to the Carradice Barley.   Throw in a Brooks C15 which used to be the saddle of choice on the Concorde, and you get a very British affair. 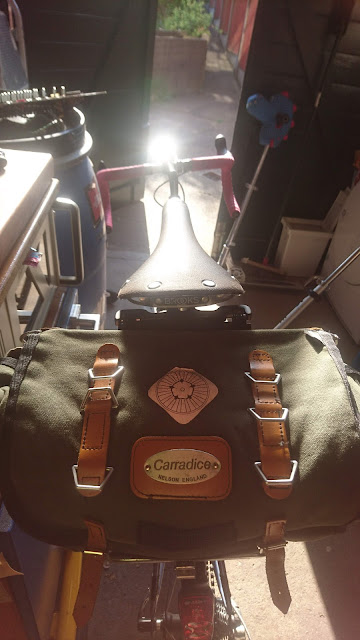 Now fill your bottle with English Ale, pack a breakfast tea bag, ride out fueled by an English fried breakfast for a mid ride snack of a Cornish pasty and a scone, before tipping your tweed cloth cap and racing a whippet back home again.

I'm rarely a chest thumping "British is best" kind of guy.   My job is European and I love the different European influences and cultures.  I think Brexit is bullshit and that any national patriotism or pride is tainted by the bigoted BNP, EDL, UKIP members who think being British is some form of Empire based superiority.  The word "patriot" only makes me think of gun toting American action heroes in war films with wet fluttering flags in slow motion and Fanfare for the Common man.  But some days, on days like today, I can really appreciate being on a 30 year old British hand crafted bike, my arse sitting on a proud and historic British branded saddle, whilst carrying my dinner to work in a functional, practical and stunningly well made and good looking British saddle bag with a very British style.   The full kit may be international, but the key parts were proudly crafted within the British isles over the last 35 years.


* technically, the Brooks C15 Cambium is made in Italy, not the Brooks Smethwick factory like my Brooks Swallow saddle.   My Swallow is currently with Mercian while the Genesis is repaired.  The C15 is a fantastic saddle, but I miss my Swallow.
Labels: 853 British Brooks carradice cycling steel summer