One thing I've had which has out lasted all but my family and a kids teddy I still have is my Concorde.   She's been with me through various girlfriends, pre-dates meeting my wife, has lived in every house I've lived in, hurt me, brought me joy, heard me laugh, cry, swear, sweat, pant, curse, giggle, vomit and shout out.  She's been rebuilt more times than I care to recall, trashed more equipment, burned more calories and been with me for at least 10,000 miles so far and started of life as a one year bike, to be raced and sold off.

Nearly a case of Triggers broom, the three/four parts remaining from when I built her in 2000 are the frame, down tube cable stops and the under bb cable guide (itself evolving from my earlier Dawes).

My ride is a 1999 ex BCF/WCPP team issue Concorde which was commissioned in 1998 for the World Class Performance Plan (WCPP).  She would have been built 1998, raced in 1999 and was stripped and put up for sale in 2000.  I bought the frame from the Manchester Velodrome bike sale in the February of 2000, as a skint student - £100 for an ex team issue bike, in lightweight Alu? Bargin! The frame was completely stripped at the time.  Over the next year, I budget bought various parts (mainly Ultegra 6500) and cannibalised my old ride to build it up to a semi decent ride.  Since then, it's had cash thrown at it ever so often and has been my main "fast ride".   Photo above is as she stands today, at the end of 2017, post Eds-Lon (except for the swapped crankset).  The photo below is from it's May 2014 condition (post Fred Whitton) hence Quattro wheels and a few other more recent purchases and below that is from London Surrey 100 in 2013.  For me, this bike is superb.  The ride response hits the button for my build and riding style, and even though it's now coming up 18 years old, I'm loathed to upgrade.

From what I know, the BCF/WCPP commissioned Concorde frames for the whole GB squad, with these bikes being full Dura-Ace spec of the day. There are mention of them in this interview.  They were mainly raced on the domestic scene and the lower league pro races in Europe.

The frame isn't actually a Concorde frame.  From what I understand these were built in Italy in 1998 as these Concordes were re-badged Ciocc with other frame builders contributing.   Once built in Italy they were painted in Holland or Belgium for branding, then supplied to the WCPP (there is a little info here) ready for the 1999 season.  The frames were built with all straight tube profiles, standard 27mm seatpin, head tube for either threaded or 1 inch threadless and downtube bosses for either levers or STI's (remember the late 90's weight-weenie style of front mech off a town tube?). The ride is fairly hard from the all alu construction, the carbon fork (not original) tames the front but maintains the bikes very sharp ride characteristics. I've seen names like Billato and the Bonatii brothers linked to Concorde but can't figure where they would fit in with the late 90's aluminium scene.  I'm guessing that being the WPCC they may not have been off-peg but custom built for the rider.  The frame was light for the day (I've had various builds since 2000 so can't remember the actual frame weight).

My frame in particular has the name "James" on the toptube.  As 1999 was the dawn of the internet, I haven't tracked down any details of team rosters for that year, so I can't tell what happened to "James" (neo-pro that never made it full pro? Mark up frame for a James as a sweetener for sponsorship money? Backroom staff issue?). As other names from the era have passed through, I don't recall a James hitting it big.

I've Google searched various terms to see if I can find out anything more about these frames, but mainly drawn a blank - they aren't the steel PDM Concorde's of folk law or racked with historic wins so kind of slipped under the radar.  The following year the WCPP swapped Concorde to carbon fibre Treks' before a few years later swapping to Pinarello's so there isn't the whole gamut of team replicas floating around or cult pull.  There is another frame on Flickr which was bought in the same way (same day!), I saw one pass through eBay may be a year ago, and there's a random link to one being sold in Turkey earlier this year (if you trust Google translate).  Historically, these frames are from the era that kicked off our current seasoned pro's.  If it hadn't have been for the WCPP and Peter Keen starting the development of young talent at the end of the 1990's, the likes of Wiggo and Co wouldn't have had the opportunities that lead towards Brailsfords reign in the late 2000's.

I've put 1,000s of km's into this frame over the last 16 years and it's now showing it's wear a little, mainly the paint is going while most other parts have had some degree of servicing. I'm hoping to free up money this winter for a possible respray and refurb (replace crash damaged parts, bring a few bit more up to date, maybe a carbon seat post to dampen the aggressive ride qualities from my family joules) but this is my prime bike so won't be authentic retro.

If anyone can fill in some of the history of the frame, such as who built it and where, find out who James was, has a similar stead or any info, I'd be most grateful! 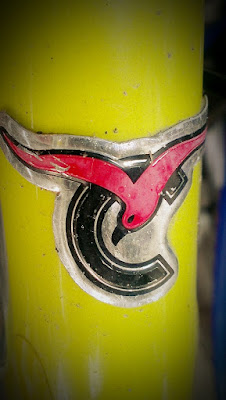 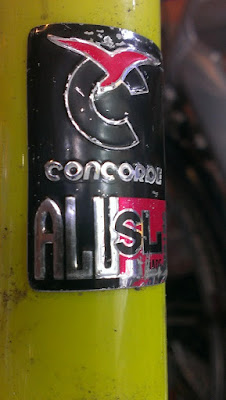