A nugget of nostalgia. 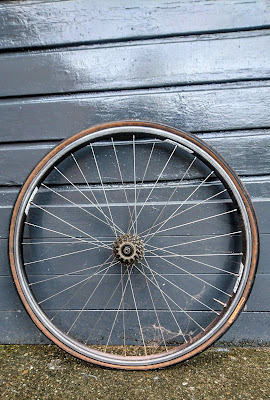 Sitting tucked away in my garage is a spare wheel which never gets used and at the moment unlikely to see action again, but has a lot of sentimental value.  It may be classed as pretty much retro-cool these days.   Add some Instagram filters, an oiled wood background, a tattooed hand and the hint of a leather apron and it could be Hipster porn.   Or maybe some Motorola colouring, early 90's Andy Hampsten style ski-goggle sunglasses and it can do a 90's retro race.   Maybe one day I'll find a matching rim and have a set for a vintage Pinarello; but for now it sits idle.   It's a bit of a mongrel of a wheel as it's a Campagnolo Mexico 68 rim in black with a Shimano 105 7sp hub, double butted spokes and the original Continental Grad Prix rubber is still wrapped around it.   It was hand build somewhere around Manchester around 1995 - prime Indurain era, and Indurain used Campagnolo.  I bought this wheel at a cycle jumble in the Manchester Velodrome around 1996 and although it's fairly low mileage, it's got a bit of kudos to it.

The rest of my kit from that period I've pretty much lost, thrown out or replaced, but that back wheel still kicks around because it was kick-ass.  And this is why.

One Saturday morning, being a skinny teen, I'd ridden with some others before we split at the top of Chunnal and headed down towards Glossop.  I wanted to avoid the rain and accelerated on the descent, getting into a tuck position once I'd gone as fast as my 52x12 would let me.   As that back wheel spun, I still remember the distinct hummmmm of the freewheel as the paws had no chance of making a distinct clicky-tick.   Heading into the corner nearing the bottom of the pass and still being  tucked up and way to fast, I remember the fear of shifting position to try and reach for the brakes so kept low with my nose just over the stem and shot round it with my heart in my throat - and glimpsing 61 mph on my little Sigma speedo.  Sean Yates, you inspired me.

At the bottom of Chunnel the police used to like catching speeders entering the 40 and 30 zones, working in pairs with one holding the speed gun, the other lot pulling drivers over - and that morning I was the cyclist they caught!   I never confessed to seeing 61 on the bars and pleaded ignorance, but got told off for doing 56 mph in a 40 zone and 48 in a 30 zone.  I remember the telling off and warnings about speeding in general and the dangers of going so fast on a bike (and the "bloody hell, well done kid" the cop said off the record!).   I got home and didn't tell my mum (over 20 years later, I think she knows.......if not, SURPRISE!)

I've been over 56 mph since, but not over 60 mph.   It's not that I haven't tried, but the mix of lack of opportunity and the fact of being 16 year old and fearless means I'm yet to have an official GPS record of over 100 kph.

The rear wheel is pretty much all that's left of that bike.  There is the cable guide which still sits under the Concorde's bottom bracket which even did LEL with me but the frame, bars, cranks and everything else has since gone.  That morning is still a story to tell people over a beer ever-so often.  For the past 20 years, the wheel has been used on various other uses but as it's a 120mm OLD and 7sp cassette, it quickly got replaced (in 1998 I think when I got the Concorde) with a 9sp compatible wheelset so the fastest wheel I've owned did a limited number of miles and still has plenty of brake track left.  It had been used as a spare rear wheel for a turbo rig for a short time but as even this is now 10sp, this fantastic wheel now sits idle.

Engineering wise, that wheel just appears to be a quality wheel even 20 years after it was first build.  There will be mass produced factory wheels being churned out today which may be lighter, more technologically advanced, cheaper..etc, but the strong build of the Campagnolo Mexico 68 rim, Shimano hub and double butted 3-cross spokes just screams "this is a proper wheel."   I guess the number of bike wheels which have touched 60 mph is low.  I'll put a wager on >20 year old wheels which have done over 60 mph are even less.
Labels: 60 mph Campagnolo equipment kit nostalgia Shimano