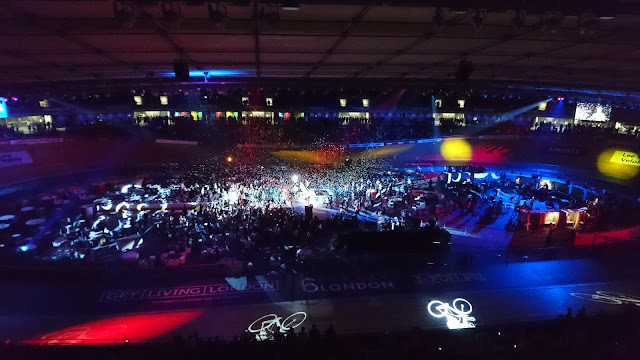 A massive Thank You! to my sister-in-law and her husband for making this possible!

A bit of backstory:  When your in your 30's, employed, have kids and all the rest of it, time to go out with your partner becomes more and more precious.   So Sal and Ged very generously offered my for my birthday.....babysitting!   On the occasion you can get a babysitter, most couples would probably go for a meal, not-talk-to-each-other-in-a-cinema, or go to the local.  As it was an open offer to take advantage off and all the kids would be together in London, we thought we'd see if we could have a night out, and where better than the Queen Elizabeth Olympic park and velodrome for the last night of the 6 Days Of London?   So we did!

For those who don't know, the 6 Day events are 6 consecutive nights of racing in a host velodrome.   Each venue which has a 6 is part of 6 Day series which then go into the final result, i.e. 6 Days of London, 6 days of Amsterdam, Berlin, Copenhagen and finally Mallorca.   A mix of teams and individual sprinters, events are repeated through the 6 days with points in each race.   There will be winners on each of the nights, but the important results are on the final night when all the scores are settled.  All riders do their events every night - no nights off or subs, the winners have to have consistency.  The sprinters fight each other, the teams fight each other and rivalries are fierce.

The men have the 6 Day competition which uses both sprint and endurance races, while the women fight out the Omnium while between all these, the sprinters go for all out entertaining power events.

The racing is fast paced with races being as short as two laps or up to sixty minutes with multiple sprints.   There is minimal empty track time between events as as soon as one race finishes, the next are on track and warming up for their event.   Riders will ride multiple times per night so you get a real feel for each rider's character as the events progress.   The velodrome has a DJ, a MC, presentations, lights, an on track interlude and plenty of noise.   The atmosphere is a party from start to finish with racing throughout the night.

One of the appeals of the 6 was watching entertaining racing, in London with Anna with that atmosphere.   To add a bonus to it all, the Six Days of London were Wiggins and Cav's final track race on British soil to add to the carnival. 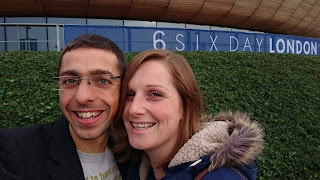 It's been around 15 years since I last visited a velodrome, and even then I was always track side, so this was exciting for me.   Of all the things that the event could live up to, the London 6 delivered and was just an epic event with the atmosphere, racing and results. 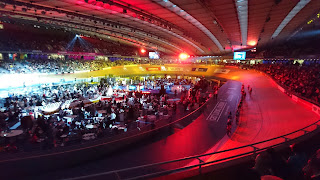 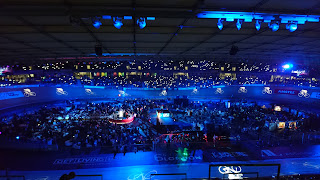 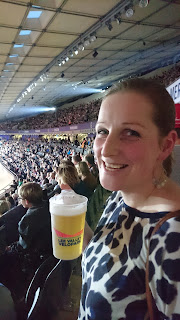 Although some people commented that the women's racing wasn't as good, Katie Archibald was phenomenal.   She dominated, raced tactically and was just brilliant to watch.  She raced, we shouted her on!

The sprinters were billed as the entertainers of the track and they lived up to their reputations with the ego's, bravado and whipping up the crowd.  Nate dominated it.


The events that everyone want to watch were the mens 6 Day events.  Every time Cav and Wiggo rolled onto the track there was a raw.  The Derny Race and Final Chase were just fantastic.  As Wiggo and Cav had gone into the final night (and race!) one point down but one lap up, the final hour of racing would decide the whole 6 days.   And it was fireworks from the off with the Australians (Meyer/Scotson) and Belgiums (De Ketele/De Pauw) fighting it out, making Cav/Wiggo respond, losing a lap, then gaining a lap.......counter attacks..........fighting laps......failed launches.........missed slings......intermediate sprints......the lot.   In the closing laps, the Belgium's managed to retake a lap and go a couple of points up on Cav/Wiggo with only the final sprint to settle it.   Cav sprinted........but lost to the Belgium's.   Fantastic battle all the way to the end, with very raw voices by the end of the night. 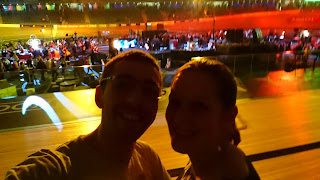 Ok, my sports reporting may be well below Cycling News standards, but m any thanks to Ged ans Sal for the babysitting and hosting us for the long weekend and thank you to Anna for the 6 Day tickets.  Absolutely amazing night!